Trying out the new export options 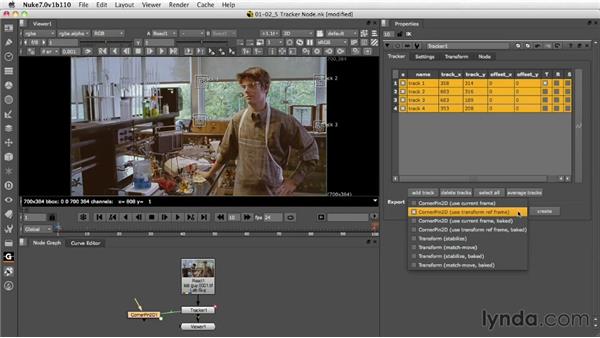 The new Export options menu is down here at the bottom of the Tracker tab.…This pop up gives you several different choices.…This pre-builds nodes for you.…The first choice is the CornerPin2D Node using whatever current frame the…playhead is on, so if I select that, I then have to make sure I choose four and…only four tracks and then I say Create, and there is my CornerPin Node, using…Alt+E to show the Expression Link, it is in fact a link to the original Tracker…Node, I will put that over here.…

I could also choose the CornerPin Node that uses the transform reference frame;…that would be on the Transform tab, the reference frame right here.…Now both of these are going to be Link Nodes, these two options are the exact…same type of nodes, only the data is baked in, no links.…Here I'm going to create a Transform tab that would be set to stabilize my data,…so I'm going to choose let's say this track and this track, and then I say…Create and there is my Transform Node set for stabilizing data.…