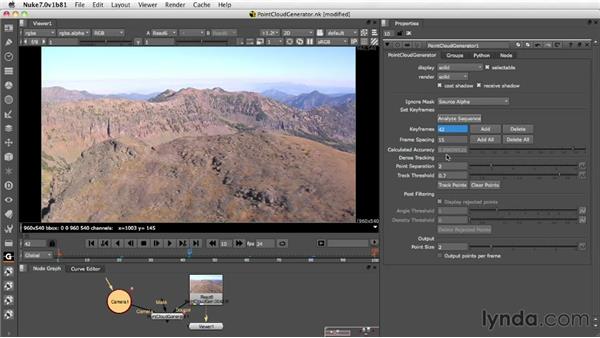 Join Steve Wright for an in-depth discussion in this video Tracking and point generation, part of Nuke 7 New Features.

The PointCloudGenerator has been rewritten to calculate cleaner, more…accurate point clouds.…The workflow has been changed so that you analyze a shot to set keyframes,…calculating the accuracy for each keyframe.…You can then select the most accurate frames to create a point cloud.…To see how it works, let's go get a PointCloud node.…3D pop-up>Geometry>PointCloudGenerator, we hook the source input to our clip and…by the way, this clip is in your tutorial assets and also it has a built-in…Ignore Mask, so we are going to need that.…

So in the PointCloudGenerator node, we need to set the Ignore Mask to look at…the Source Alpha channel.…Okay, don't forget that.…Next, we need a camera input, a tracked camera.…So we'll just go get 3D>Camera, hook that up, you will find a tracked camera in…the tutorial assets.…So make sure you're on the File tab and enable read from file, then we will go…load our tracked camera data, open up the folder, go to the Tutorial assets, here…is our PointCloudGenerator tiff files and here is our TrackedCamera.fbx file,…