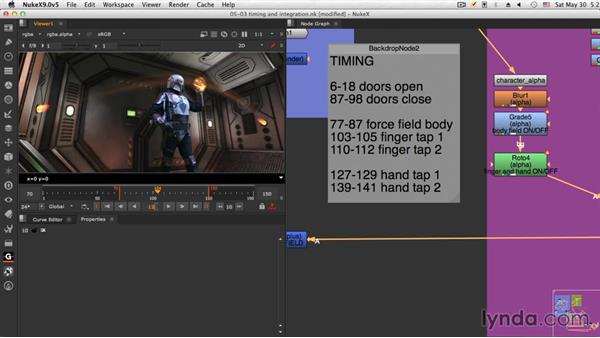 - We have our wall omitters all in position and animated…and now we've got to work up the timing…have them come on and off at the right time.…So that's a two-part deal.…First of all, I'm going to set up some masking.…So only the ones that I want come on at any given time.…When we're doing the full-body beam…we want all four of them on.…But when we're doing the finger tap here…we just want the top one on.…And when we're doing the hand tap there…where we're using more beam, we want to have the top two on.…

So let's get that all working now.…Let's come over to where we made our beams.…Zoom in.…We'll start by adding a roto node…so we can mask off the emitters.…First of all, I need to mask off this corner here…so that the emitter and the emitter beam…don't hit this wall bulkhead.…So I'm just going to select a Cusper Bezier…and just do a simple little roto right here.…

And to make it erase this I have to put this…into the RGB channels and I don't want it to be white.…I'll just select the shape tab…and turn the color for the shape to zero, or black.…