Setting up and using MotionBlur 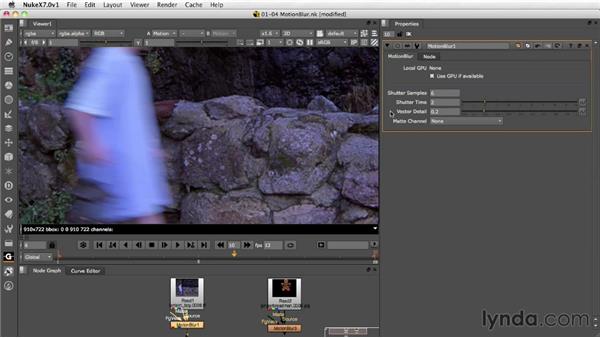 The new MotionBlur is a NukeX Node that was lifted from the F MotionBlur Node in the FurnaceCore plugin set. It uses Nuke's motion vector technology to intelligently apply a high quality motion blur to the moving parts of the clip, it supports GPU processing for much faster rendering, but that require certain NVIDIA GPUs and CUDA drivers. The images we're using here are in the Tutorial assets.

We'll find the MotionBlur Node up here in the Filter tab and there is our MotionBlur Node, and we'll hook it up to the source clip there. Let's make a little more room for our Viewer, set H to get our maximum viewer, maybe a little more, okay, let's zoom in a bit, see what we got, let's start with the Shutter Time, here's what this number means. A Shutter Time at 0.5 is 180 degree shutter which is like a normal film camera, we say a shutter time of 1; that's a 360 degree shutter, so you're getting a lot of motion blur, and a Shutter Time of 2 is going to get you even more.

Now notice that we're getting sort of a double or triple exposure here, that's because we need to increase the shutter samples. Right now we're only getting three samples, you can actually see, one, two, three copies of the image. So if we tap that up to 4, it looks better, 5, it looks better, 6, there you go. So you turn that up until it smooths it out, keep in mind, the more shutter samples, the more processing time. Next, let's take a look at the Vector Detail value.

The Vector Detail increases the amount of detail in the picture, which gives you a higher quality render if you've got a lot of fine detail in your picture. So if you set the Vector Detail to 1; that means you're going to get a motion vector calculated for every pixel on the screen. If you set it for 0.5, you're going to get a vector detail for every 2 pixels and the default of 0.2; you're getting one vector for every five pixels. Now let's take a look at what that means. Let's scoop down here and I'm going to push into this part here.

I'm going to set the Vector Detail down to 0.1, which is 1 vector, every 10 pixels. Now, I want to make a copy of the Motion Blur Node, hook it up to this source, hook my Viewer up to it and then I'll set the Vector Detail to 1, maximum resolution. Now as I toggle between the two, you can see the difference in sharpness. It's even more noticeable over here.

So the greater the vector detail, the more detail that's kept in your picture, but once again, there is a processing price to pay. Down here, the Matte Input. This is the input from matte that you might draw over your foreground character in order to isolate him from the background. This will prevent tearing of the background that you sometimes see with the motion vector processes. The foreground vectors input here, is if you're using the vector generated node to precalculate the vectors, this is a good idea if you're going to use those vectors in several locations, otherwise the motion blur node calculates it's own vectors.

A kicky thing you can do is to use the vector generator node to calculate vectors from another clip, feed them into this motion blur node and apply them to a different clip, gets you some very interesting effects. Let's take a look at actually a classic setup. Here you have my Viewer, set it to ping-pong; I will play this for you. This clip has absolutely no motion blur, so you're getting horrible motion strobing. So we're going to use the motion blur node to fix that, there you go.

Now let me play that and you'll see with the motion blur it looks a whole bunch more natural. Stop that and you can actually see how the motion blur is changing its direction and it's intensity on different frames, depending on the speed and the direction of the target. If you're doing a speed change using Oflow or Kronos, they'll take care of the motion blur as well. The Motion Blur Node is for those situations like this, where you have motion strobing in a clip that need to give it a realistic motion blur.

Video: Setting up and using MotionBlur