Setting up and analyzing 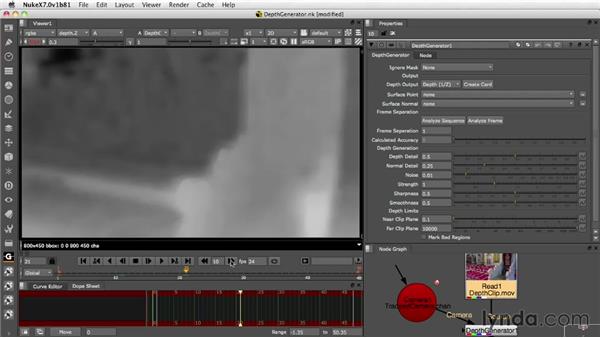 Join Steve Wright for an in-depth discussion in this video Setting up and analyzing, part of Nuke 7 New Features.

DepthGenerator has been improved to calculate cleaner more accurate depth passes.…The work load has been changed, so that you can first analyze the shot to…calculate the optimum frame separation.…There are also new output options to convert depth to position and normals passes…for use with other Nuke nodes as well as the ability to convert the depth…pass to an extruded mesh.…I am using the DepthClip.movie file, which you will find in the tutorial assets,…if you'd like to play along.…In addition to the clip, we need a tracked camera.…

So, let's go over to our 3D pop up, we'll get a Camera, and I happen to have…tracked camera data for you.…So just click on the Import chan file, browse to the DepthGenerator tutorial…assets, and click on the TrackedCamera.chan file. Say open, and we now have a…completely animated camera.…We're done with the Camera Property panel, so we'll close that.…Next, we will add our DepthGenerator node, so we will select the Read node, come…over to the 3D pop up, and select DepthGenerator, and hook up our Camera.…

Video: Setting up and analyzing