Setting the finger and hand timing 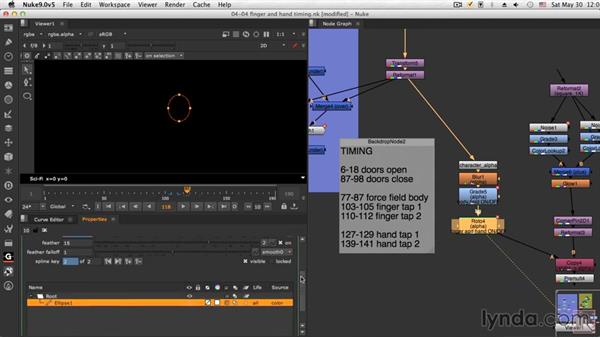 - We've got our shield animation working…for the full body contact.…Now, let's do the hand and the finger tap.…To do that, we're gonna use a Roto node…and of course we'll be working with the…alpha channel of this guy.…Let's hook up to our alpha channel here.…I'm going to use a different technique.…I'm going to use like I said a Roto node here.…Let me add that Roto node right here…and before we forget, let's label this…finger and hand ON/OFF.…

Okay, 104,…this is where I'll draw my shape.…Now, I need to see my guy so let's switch the Viewer to RGB.…There he is.…Okay, let's push in on the hand…because this is where we'll be working.…