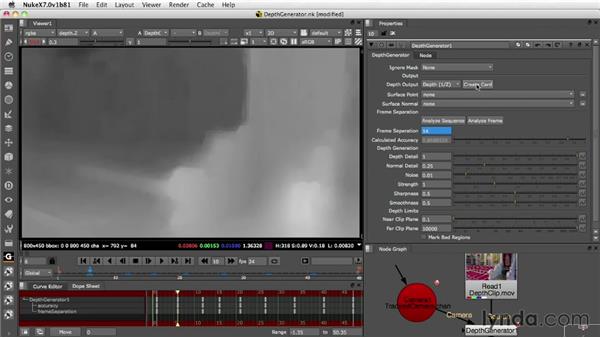 This is where we're going to refine the depth pass itself, starting with the Depth Detail.…This is the pixel sub- sampling from the original clip.…A Depth Detail of 0.5 means that the image has been scaled down to half resolution.…If I set the Depth Detail to 1, it's using the image at full size, more accurate…depth calculations, but slower processing.…We will come back to normal detail in a minute. Next is Noise.…The Noise setting tells it how much noise in the clip to ignore.…

If I set that up to 0.2 for example, you see the clip has become so blurred out…that we don't get any good results, so we will put that back to default.…The next parameter is Strength, you increase this to better match the fine…detail in the picture, it sort of like pulls the Depth Map tighter to the image.…You see what I mean if I crank this up to two.…Okay, we will put that back to default. Next is Sharpness.…Sharpness actually performs a sharpening operation on the final Depth Map…itself, you can see the effect of that, if I take that from 0.5 to 0.9 for example,…