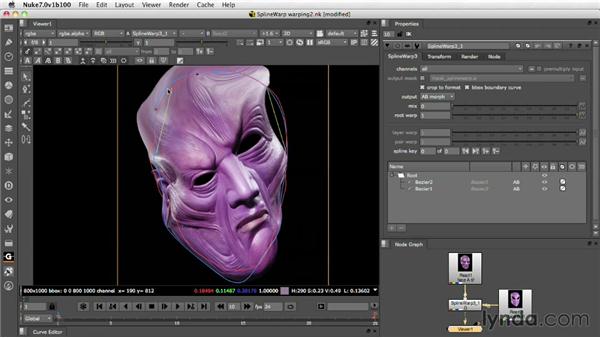 When morphing two images together, the first step is to apply a warped image A…that matches it to common points of image B, such as eyes, nose and mouth.…Matching image A to image B, takes some changes to the set up in the workflow,…compared to a simple warp.…Here we'll see how the new tools help with that process.…By the way, you can find our new face B in the Tutorial assets and be sure you…hook up face A to input A of the SplineWarp and face B to the B input, because…we're going to be warping A to B. Okay, rehome the Node Graph.…

First thing we will want to do is setup a Viewer wipe so we can bounce quickly…between our two images.…So we'll select Read 2 and type 2 on the keyboard and that way we can ping pong…quickly between the two.…However, sometimes we're going to want to see a wipe, so let's go up to our wipe…controls, set it for wipe, SplineWarp3 on the left, Read 2 on the right.…Now we can use our wipe controls, the fader bar, so we can do a dissolve,…sometimes you want to dissolve like this, sometimes you want to ping pong like…