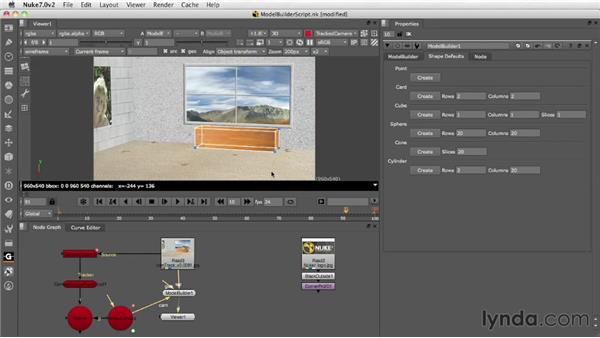 You can use the ModelBuilder node to create geometry more complicated than a…simple card that can be used for camera projection.…Here's an example of the workflow, by the way I'm using the ModelBulderScript…you'll find in the Exercise Files.…So let's add our ModelBuilder node, go to the 3D tab>geometry>ModelBuilder, hook…it into our source clip, hook the camera input to the TrackedCamera, nothing…happens until we move the cursor into the Viewer.…Again, we'll turn off the grid, so we'll select our Viewer settings, 3D grid off,…close Property panel.…

Now its time to take a look at the Shape Defaults tab.…This tab defines the precision, the number of polygons for each of the shapes…you're going to create.…We created the card earlier and it had a 4x4, if I want that to be a 2x2 I could do that.…So you can create the geometry here, just as well as you can from this popup,…this popup list of course is going to use the settings over here on the Shape Defaults.…So let's say I'm ready to create a Cube, I want to create a Cube for this box…