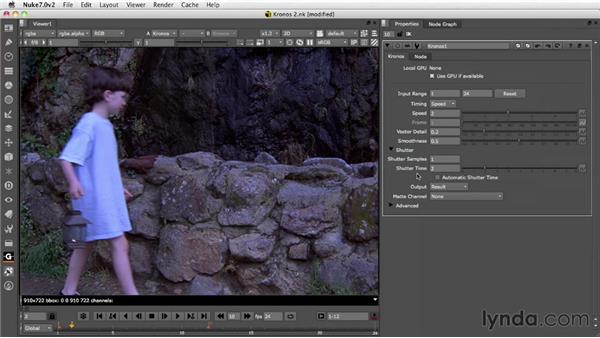 If a shot has been sped up the original Motion Blur will not be sufficient to…avoid motion stroking.…Here we'll see the controls for adding Motion Blur to a shot using Kronos.…First, we'll select the Read Node, go to the Time tab and get Kronos.…The default Speed is 0.5, slowing it down.…So let's go to a Speed of 2 in order to speed it up.…I need to set some In and Out points, because now my clip is only half as long,…so I only have 12 frames to work with.…So let's play that and see what happens.…

Okay, we have terrible motion strobing, because it's moving way too fast for the…original shutter timing.…So let's see how we can fix that.…We'll twirl down the shutter menu and we'll find three things in here that will help us.…The first thing we would do, is set the Automatic Shutter Timing, here you're…telling Kronos that you want it to figure out the appropriate shutter time,…unfortunately, nothing has happened.…Let's zoom in a little bit.…The reason is we only have 1 shutter sample.…So I am going to increase that to 2.…