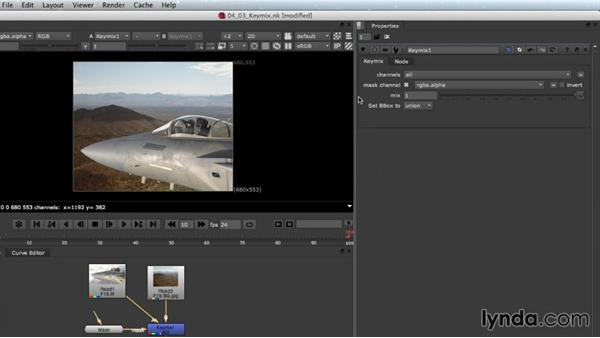 Typically, that'll be your set up. You'll have a three channel foreground, a three channel background, and a mask. The KeyMix node does an over operation, and that is the only operation. You don't have a choice like you do with the merge node. And again, the basic application is if you want to isolate something out of one plate and comp it over another plate. That's the purpose of the KeyMix node. Important point is, that the foreground image to the KeyMix node be a unpremultiplied image. Now the merge node wants a premultiplied image.

If there were multiple layers, you could pick them from the pop-up list. Next is the mask channel. This mask channel, of course, pertains to this mask input here, and it's asking what channel is your mask in? By the way, this little toggle here allows you to do a quick toggle on and off so you can do easy compares before and after. So here's where you choose the mask channel. One, that mask input could have three, four, five, 17 channels. So you pick the one you want by default, it's going to be the alpha channel, but you could for example have your mask in the green channel of the input image.

Use the KeyMix node to lift an element out of one frame and comp it over another. The key is that you use separate mask element, it does not matter how that mask is created. It could be a roto, as in this case, or any kind of key such as a luma key or chroma key. However, if you want more control over the edges of your composite, then you'll want to use the admix node, the subject of our next video.