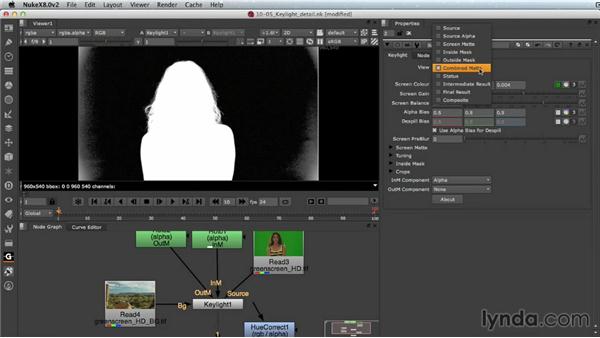 Like all keyers, Keylight can use both holdout mattes and garbage matttes, to improve the key. In this video, we'll see how to set them up, as well as how to color correct the Keylight composite, since Keylight has no built-in color correcting tools. I'll open up the Keylight node, home the viewer. And then set the view, to screen matte. As you can see, we're going to need some garbage matte out here, and, if I turn the viewer gamma down, you can see I'm going to need a holdout matte, to clear these transparencies. So, let's start with the holdout matte.

Here's my roto for the holdout matte, and, it's in the alpha channel. And in Keylight speak, this is the in matte. So, I'll hook it back up to Keylight. Switch the viewer to RGB. And we'll connect the in matte. Nothing happened. So let's check it out. We'll go up to the View, and we'll say, Show me the inside mask, and there's nothing there. The reason is, we haven't set the in mask component yet. In other words, which part of the in mask do I want to use? By default it's none, so we're seeing nothing.

I could use luminance or inverted luminance, but of course, I need the alpha channel. And there's my inside mask. Now, let's go back to the Screen Matte. And we don't see it in there yet. Because, to see the screen matte, and the inside mask combined, we have to set the view for combined matte. There we go. I'll set the viewer back to default, so we can take a look at, doing a garbage matte. So here's my garbage matte. Again, in the Alpha channel. Back to RGB, and back to the Keylight node.

And we can see the effect of that out mask, as a garbage matte, by toggling the node on and off. I'll set the View back to Final Result, and now we can talk about color correcting. You've noticed that in Keylight, that there are no color correcting tools. So, let's see how we're going to deal with that. Note, that the final output is a premultiplied four channel image. I also have a little more spill here than I would like. So, I'm going to just use the HueCorrect node, and do a little spill suppression.

I'll rehome the viewer, and now we can see it toggled on and off. Effect my color correction. Like all keyers, Keylight requires practice to get your speed and quality up. Grab a bunch of green screens and blue screens, and key them with Keylight, and before long, you'll be pulling high quality keys, in just a few minutes.