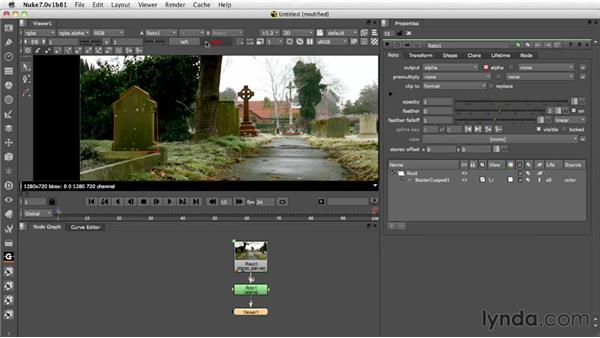 Join Steve Wright for an in-depth discussion in this video Improving productivity with the new stereo features, part of Nuke 7 New Features.

I've restarted Nuke to show you some funny productivity features we're working…in stereo with the Roto or RotoPaint Nodes.…First let's add a Roto Node;…I want to show you something in the Property panel.…So cursor in the Node Graph, type O to get a Roto Node, type 1 to hook it to the Viewer.…Now I'm going to float Property panel down here to show you this, and then…we'll open up the Project Settings and click on the Views tab, now watch this…part of the Roto Property panel, when I click on the Set up views for stereo, bang, see that?…We got these new stereo fields.…

Okay, we're done with the Project Settings and I'm going to redock my Roto…Property panel into the Property bin.…Next we'll need a stereo pair, so let's click in the Node Graph and type R and…we'll select the Exercise Files folder and browse to our stereo_pair.exr, open…that, hook it up to our Roto Node, we will tidy up here .Okay, so let's push in…with the H key, take a look at our left and right views, here's left, right,…left so this is in fact a stereo pair, let's push in on this tombstone, I'm…