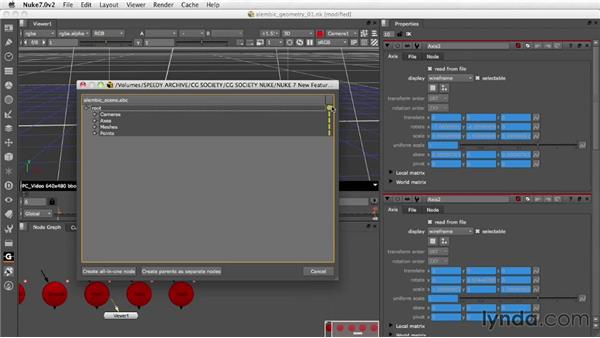 Alembic geometry is a major new development in CG that allows scene content to…be shared between different apps very efficiently.…If you're not familiar with Alembic then I recommend you read the article that I…published about it before proceeding with this video.…Now there are several ways to import Alembic geometry into Nuke.…But let's start with the Read node, because that allows you to bring everything in.…Cursor in the Node Graph, we will type R to punch up a Read node and I'll select…the alembic_scene.abc, abc is the extension for Alembic geometry.…

By the way, all these files are in the tutorial assets for this video.…So we'll select that, click Open and it opens up the Scene Graph.…Now everything in here was created in Nuke.…In the Points folder there are particles and a point cloud.…Under Meshes which is Alembic, speak for geometry;…we have an Earth, Moon, and Sun.…On the Axes, we have three Axis nodes and we have two Cameras, SceneCam and TopCam.…I will fold these back up because the nature of the Read node import is to bring…