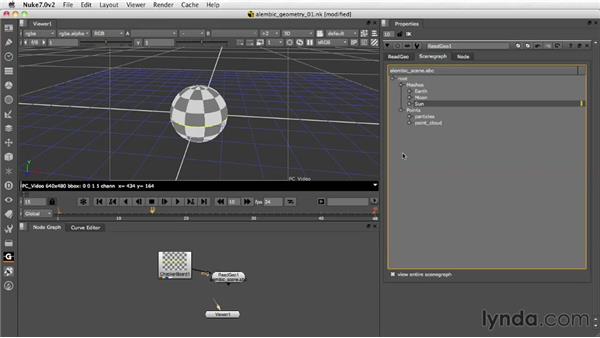 You can also use the ReadGeo, Camera, and Axis nodes to bring in specific…individual Alembic scene elements, such as one piece of geometry or maybe just a camera.…Let's start by looking at the ReadGeo node, so we go up to the 3D…tab>Geometry>ReadGeo.…We go to the File field, open up the browser and select our Alembic scene, which…opens up the Import dialog box.…

Now we have in here everything for the entire Alembic scene, points,…meshes, axis, and cameras.…But we just want to bring in one element, let's say the sun.…So the first thing we do is turn off Root as being the parent, then we can…select the sun and turn that on as a parent.…Since we only have the one parent, it doesn't matter which of these options we…choose, I will just choose this one.…We will switch to the 3D viewer, and there is the sun, just to make it easier to…see, let's hook up a little checkerboard to it.…

And when I play the clip, we get the animated sun loaded in from the…Alembic scene file.…Up here is the sub frame option, if you read my Alembic PDF file, you know…