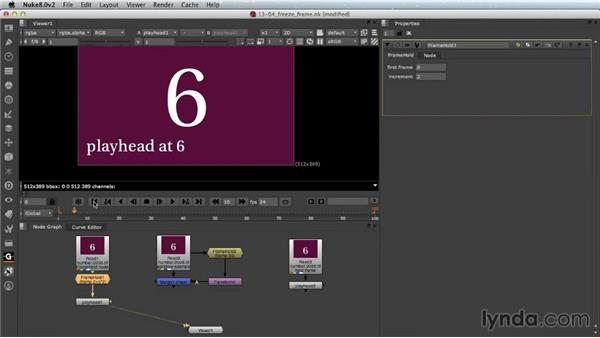 In this video, we'll see how to do a freeze frame in Nuke. Two approaches are demonstrated. The use of the frame hold node, and setting a freeze frame in the read node. We'll start with the frame hold node. We'll find that if I select the Read node up here in the Time Pop up, and we'll select Frame Hold. When it opens up, it immediately freezes the clip, held on frame 1. Well if I move the playhead, you can see here, that it's not changing the clip number. And by the way, you can see right here, what frame number the playhead is on.

I'd like to freeze frame 50. We come up to the First Frame and enter 50. So the output of the Frame Hold node is frame 50 of the clip no matter where the playhead is. Another feature of the Frame Hold node is the increment field. Let me put that back to 0 and I'll just set increment to 2. Set the playhead to frame 1 and watch the behavior of the increment feature. With playhead at 1, we're looking at clip frame 1. So I go to playhead at 2, 3, 4, 5, 6.

So with the increment set to 2 it only updates the clip frame every 2 frames. Now let's take a look at a workflow example of how you might use the frame hold in a shot. So here is my original clip. I have branched off over here a Frame Hold node set to 50. No matter where I put the playhead I always get frame 50 out of that. This is a transform node just to position it, let me rehome my viewer,so its holding frame 50. And then I use the merge node to composite it over the original clip. So this is how you might hold out a frame, mask off an item of interest and then comp it back into the main shot.

The key is, only this branch sees the held frame, the main data stream does not. Next, let's look at the read node, itself. We'll open up this Read node. And again, as I scrub the playhead, the Read node and the playhead are in sync. If I come up to the frame expression. Remember, this pop up has several choices. But by default, it's set for expression. If you just enter a hard number here, like 50. That means always give me frame 50 no matter where I move the playhead. The key is, with this approach, the entire data stream, from the Read node on down, is going to see frame 50, whereas if you the Frame Hold node, the original data stream will still see all the clip frames.

Only the one branch sees the held frame.