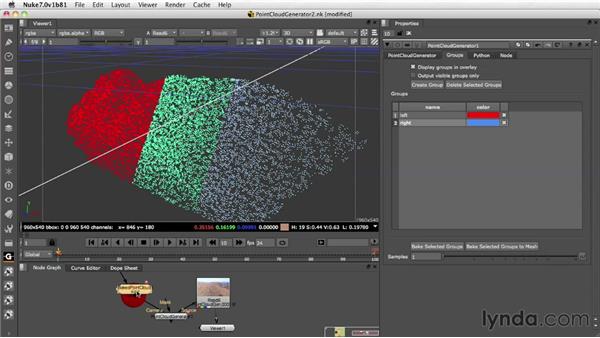 We're back to the 2D View to show you the post filtering and grouping features…in the PointCloudGenerator node.…I am going to analyze a sequence one more time, so that we get the default…keyframes. Then we're going to track all of the points, and get a brand-new…point cloud. Done, and click Track Points 1-100, go. And our render is almost…done and there you go…We'll switch to the 3D View and I can kind of prefer to look at my…point clouds as wireframe.…

Post filtering is the process of removing rejected points, now you get to set…the rules of rejection, right here.…First of all, the Angle Threshold, this rejects points less than the angle of…parallax set in this field.…If I raise this up, it'll reject points that are larger and larger angle.…So far, everything I have has greater than 10.8 degrees of parallax though it's a keeper,…but if I go up high enough, ah, there is my red.…So, it has marked the reject points in red and this means those points have an…angle threshold that are greater than 14.6 degrees.…