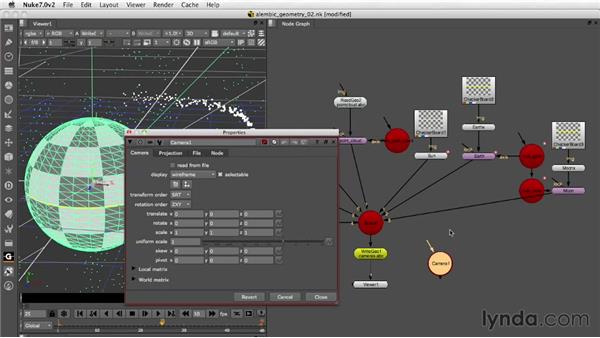 Join Steve Wright for an in-depth discussion in this video Exporting alembic geometry to disk, part of Nuke 7 New Features.

You can also write Alembic files with Nuke, either the entire scene or selected elements.…However, if you want to export lights, you will have to use the FBX file format,…since Alembic does not support lights yet.…Here is the Node Graph used to create the original Alembic scene.…We have these two cameras, we have three axis, here is our particles, there…is the point cloud and we have our Sun, Earth, and Moon geometries or meshes in Alembic speak.…Now let's say I would like to write out the entire scene.…

So we will select the Scene node, because it's connected to everybody.…We will go to the 3D pop-up>Geometry>WriteGeo, I get my WriteGeo node and my dialog box.…So I will browse to my destination and I will name it alembic_scene.abc, and of…course, the abc extension is critical, because that's what tells Nuke that this…is going to be an Alembic scene, so we'll open that.…

And by default the WriteGeo node is going to render out all the elements, axes,…cameras, pointClouds, geometries.…To render it to disk, we will select Execute and if I want a custom frame range,…