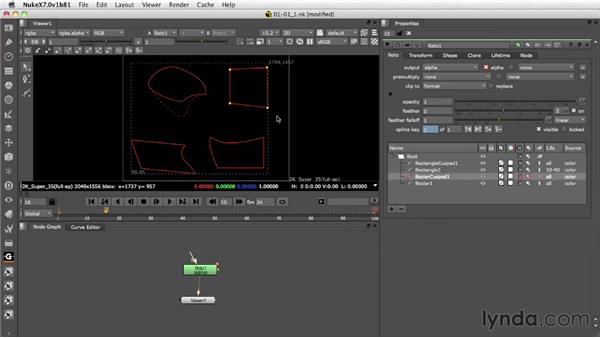 I've homed the viewer in Node Graph so we can take a look at some new features in…Roto Property Panel plus some great new copy and paste features.…First up the Property Panel, the Roto tab's got a little bit of a facelift.…You might notice that the format and output mask fields are missing.…Not true, they are just hidden here under the twirl down, there they are…format and output mask.…So, this just kind of cleans up the Property Panel a bit.…However, on the Transform tab there are some new toys, we've the skew X and…skew Y sliders, plus the skew order, how that works is, you can now do…individual skewing in X or Y, and you can change the skew order which of course changes the look.…

The Shape, Clone, and Lifetime tabs are unchanged in Nuke 7.…Back to the Roto tab.…There is a nifty new feature down here in the Curves list.…Over here in the Life column you can now do a double right-click and it will pop…up this frame range control, so we could for example set the frame range for…this spline to be from 10 to 90, click OK.…