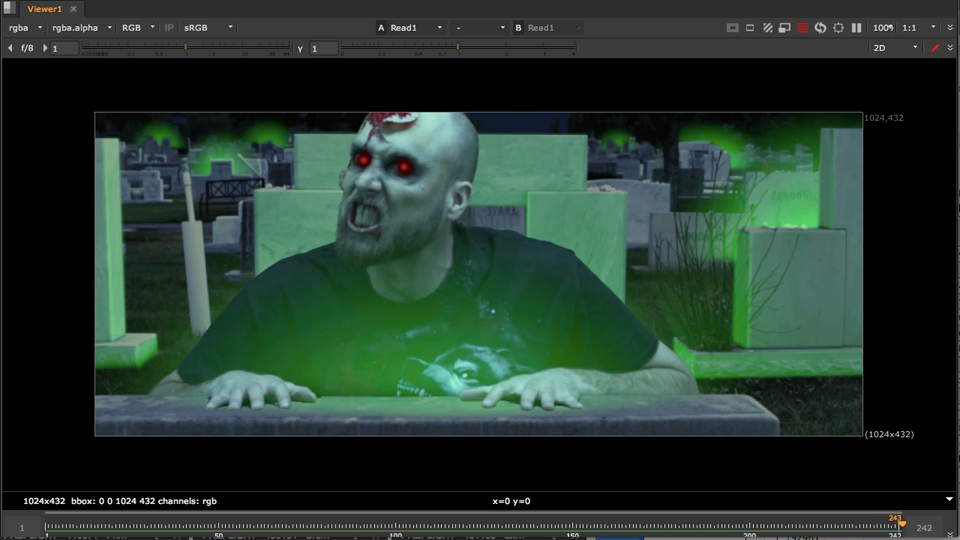 - Okay now, take a look at enhancing the bloody bits that would be the top of the head, along the cheek and these drip lines on the jowls. Now I brought in the zombie pre-comp for you, and we seem to have an error message here. That's actually a little bug in Nuke, so here's a tip. All you got to do is open up the read node. Now this applies to QuickTime movies only, okay? So you open up the read node, click on the field here, add a space and then backspace to remove it, and then it'll come in.

It just causes, I guess, to refresh the path name just by making any small edit. Okay, so here's our blood bits. We want to make them even bloodier. And of course, later, we're going to add the zombie eyes and even these fangs. But right now, this is bloody bit time. So let's take a look at how we're going to do that, have an interesting technique to show you. Make sure you're working with the time offset. Make sure you don't get a hold of that read node because then everything will be out of whack.

So here's my strategy. If I was trying to pull a key on this using a chromakeyer or one of the other keyer nodes, it's going to give me kind of a hard edged map, not very organic. When you have highly saturated colors like this, you can use a technique called a color difference matte and it's based on this principle. Saturation means there's a big difference between the color channels, right? So if we look at the red channel, you can see how bright that spot is. But if I look at the green channel, you'll see it's a lot darker.

So in the area of the blood, the red is much greater than the green. I can take advantage of this to pull a little key. So let's try it. What I'm going to do is I'm going to get me a channel merge node. I'm going to subtract the red channel minus the green channel to get that difference. So let's hook this up to the time offset. I'll add a dot so we get a nice little branch here. Hook my viewer up to the channel merge node and what I want to do is I want to say, take the red channel minus the green channel and put the results into the alpha channel.

So if I switch the viewer to the alpha channel, looky here! I got a bit of a key going, okay? All right, let's try to improve on that. We'll go back to our original colors, and here is, again, the red. Now let's look at the blue channel. Again, another big difference. So I'm going to make a red minus blue difference, okay? So let's check that out. I'll select this, put in a channel merge, branch with the shift key, hook both inputs up there.

What I want to do is add these together to beef up my key. Okay, so let's select this, get another channel merge node, hook it up to the other one. Okay, don't need that input. And then we're taking the alpha merge with the alpha, so I now have the union, the union is actually a screen operation, don't tell anybody but that's what it really is. So I now have a combination of the two together.

So here's the original, red minus green, the red minus blue, and the two together is stronger than either one of them. Okay. Next, I need to beef up this part of my little matte. It's a little thin. Got good density up here but not down here. So to do that, I'm going to add a grade node and tell it to talk to the alpha channel only. Now if I want to beef up this down here, this is dark, these are very low code values, okay? So the color correction operation that has the most effect on the dark parts of the picture is gamma.

So let's take the gamma up to something like that. Look at that, I've really beefed up my key, and of course it's also beefed up the one up here. But you'll notice, watching my RGB values, I have not gone over 1.0, okay? So that looks promising. Now I'm going to have to garbage matte this. This has absolutely got way too much stuff here, as the ear over here, for example. If we look at the regular shot, we can see, there's his ear.

And if we look at some other frames, the other ear pops in. So we need to garbage matte this guy. So of course to do that, we'll throw in a roto node right here, okay? And I'll just pick frame 202 to start, because that gives me kind of a nice, head-on sort of a thing. And looking at the RGB, okay so my bezier is selected so I'm going to click and drag, click and drag, click and drag, and I want to get these mouth guys here. So I make sure I get out of there.

Missed that ear and come back up to the top. Okay, let's feather this a little bit. Not feather but... Okay, so I'm keeping the parts I want, masking off the stuff I don't. Okay. Now, if we look at the alpha channel, of course, that's not what I want so I'm going to set my roto node with the bezier selected, the shape tab. Once again, we're doing a garbage matte, so we'll invert and make it back.

All right, back to the roto tab so I can see my keyframes. Let's set the timeline to jump every eight frames, and then I'll jump forward. I like to watch the RGB. That way, I can make sure I'm not missing anything. So I'm going to select with a command or control A to collect them all. Move over here. Again, we all know how to roto. Okay, so we'll put that over there, make sure I'm getting my jowl blood, okay? Jump forward.

See, these guy is really jumping around. That's why I moved the keyframes to eight so I get more frequent keyframes. Get that away from here, make sure I got my head, my jowls. Okay. Another eight. Pick it up, move it here. Okay, well, why don't I do this off-line and we'll come back in a minute after it's all done. Okay, we're back. And I've even named this garbage matte for the blood mask.

So let's take a look at the alpha channel, okay? And as we cruise through it, that looks good. All right, so I've got myself a nice mask to use for my color correction, to put more blood on the head. So let's go over here and take a look at our comp because this has approximate coloring that we're going to be using in our shot. We don't need to be looking at that roto anymore. What I'm going to do is I'm going to add a grade node right here above the premult, very important.

In fact, I'm going to do it right after the color correction, because this is all my color stuff here. So I'll extend that down. Let's add a grade node here. And let's name this brighten blood. Now I'm going to need to hook up my mask input, so this guy here. So now, if I move my gain, yup, I am affecting the area that I want. That's cool.

Now again, most of what I want to affect is in the darks, so again, I'm going to go after my gamma. So let's unfold this. We'll crank up the red, make it bloodier. And we'll dial down the green and dial down the blue, make it a nice, deep, rich red. Well, there we go. Now if I toggle this on and off, you can see we've made a huge improvement in the bloodiness of our zombie, including down here on the chin.

In fact, let me gain up the viewer a bit so that you can see this better. See? Even the jowl blood is more enhanced, so we're looking really grim. And in this shot, that's good. Now in the next video, we're going to see how to build those horrific zombie eyes, straight from hell.

1/28/2016
Practice your NUKE skills and prepare for the zombie apocalypse in this NUKE Compositing tutorial. Along with the green-screen zombie clip and graveyard plate supplied in the exercise files, you'll use NUKE's keying, color correction, and effects tools to make a zombie rise from the grave and animate the glow of an approaching zombie hoard.

First you'll learn how to apply a quick key with Primatte, and enhance the zombie with realistic blood, red eyes, and fangs. Then, turning to the graveyard plate, you'll make a day-for-night color correction and add interactive lighting. Finally, you'll composite the key, plate, and effects and finalize the shot, using color correction and a push in effect. The process is broken down into easy-to-watch five-minute videos, rich in valuable VFX production techniques from compositing guru Steve Wright.

For more training on the basics, see NUKE Essential Training..
Topics include: