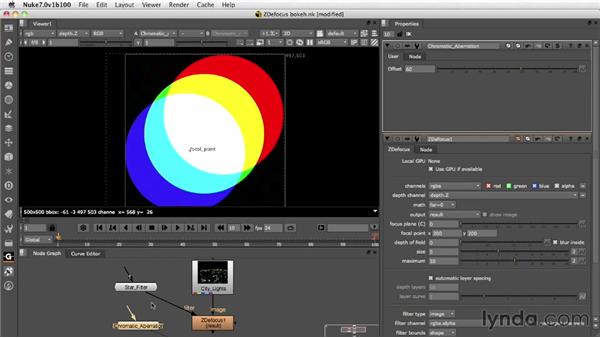 Join Steve Wright for an in-depth discussion in this video Customizing the bokeh, part of Nuke 7 New Features.

We have seen the disk and bladed filter types, so let's see what happens when we…supply our own image to create a custom bokeh shape.…Before I select that however, I am going to show you the images I have.…I have this Star Filter here and the important thing about this is there are…really two boxes to be aware of.…The outer box out here is what we call the Format.…The inner box here is the bounding box of the shape.…Note that the shape is off center from the format, it's on the lower left-hand…corner, you will see why this is important in a minute.…

So I am going to take the filter input of the ZDefocusNode and hook it up to my…Star Filter, switch back to the ZDefocusNode and zoom in.…Now we will switch the filter type to image, and there you go.…Of course, we can change the size a bit, by adjusting the size and maximum values.…So why was I going on about the format or the bounding box of the shape?…That's for right here, filter bounds. If you say shape,…you are telling it that you only want to use the shape inside the bounding box.…