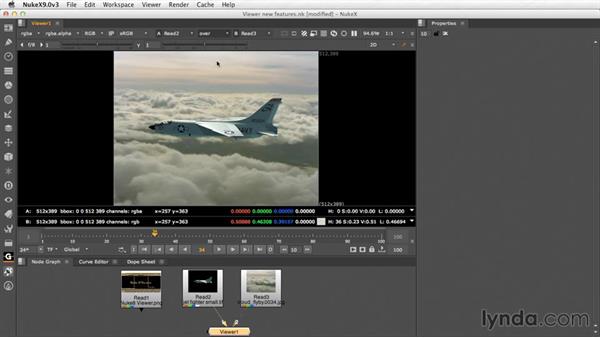 - Major changes have been made to the 2D Viewer in Nuke 9, mostly to make it more compatible with NUKE STUDIO. Here we'll take a look first at the things that have simply been moved. Then, we'll take a look at the new features. To see what's moved, I made a copy of the old Nuke 8 Viewer for you here, so we can compare the before and the after. Starting up here in the top row, the first three pop-ups, the Viewer Channels are unchanged from before. However, the IP or input process button is now here, being moved from way over here.

Also, the Viewer LUT Pop-Up here has been moved from its previous position over here. The Viewer Wipe Controls are still in the same place, although there's a couple of new features we'll take a look at in a minute. This entire row of icons here have been moved up to the top row. And they're in the same order, and they do the same thing. Here's our Viewer Zoom Percentage Report, which used to be over here. And this is still the Down Res Value, which used to be here.

Now in the second row, the Viewer Gain and Gamma Controls are still in the same place, but now the 2D and 3D Viewer Controls have moved to here from their old location here. Now we'll take a look at what's new. In the second row, we have this interesting little Eyedropper here. If we come down here, look at the Color Report Window, this Eyedropper Icon simply turns it off and on, so it's a hide and show for the Color Reporting Field. Now, here's something interesting and new, these little Down Arrows.

If I click on this, it's says (empty). These are called the Overflow Menus. This is a really neat new feature. Let me show you how it works. If I shrink the viewer's size, keep an eye on these two icons over here. I'm going to close it down, and the first one disappeared, and the second one has disappeared. But they've been moved to the Overflow Menu right there. If I resize it back, they return to the top row. Also, the Freeze User Interface Button right here is now gone.

And by default, it's actually always on, so the user interface no longer updates while it's caching to the timeline. I'mma switch the viewer to the CG jet and this cloud flyby clip in order to show you a nifty new feature in the Viewer Channel Pop-Up. First of all, they've done a minor reorganization. These used to be at the top, but now they're at the bottom. As you know, if I select the Alpha Channel, there's no Alpha Channel on this cloud, so it's black. And if I switch over to the jet input, I see its Alpha Channel, so both Inputs, One and Two are looking at the Alpha Channel, okay.

So let me put that back to RGB. Here's the new feature. If I have on Input One, I do the Pop-Up, and I hold down the Shift Key while I select the Alpha Channel, only Input One is set for the Alpha Channel. If I switch to Input Two, the clouds, they're still RGB. If I pop that one up and hold down the Shift Key while I select Luminance, now this is set Luminance, and Input One is still set for Alpha. So you can have different channel displays without using Shuffle nodes anymore.

If we don't want the Wipe Controls, we can just set it to stack. If I don't want an over, I can select minus as before or we have a new onion skin layer. Very nice! Now, there's been a number of changes down here in the Timeline. Let's take a look at that. First of all, we have four Frame Fields. Here is the Start of your timeline. Here's the End Frame, 100. This is the Duration. This is a 100 frame clip.

And this is the Current Frame Numbering, nifty new feature. We could always type in a destination number like Frame 50, but here's the new feature. I can now type in a relative jump. I can say +10. And bang, I'm on Frame 60. The Frames Per Second Pop-Up has moved over here. Now, this Asterisk means that 24 frames per second is your project settings. You can, of course, pick any timeframe you want. But just remember, the one with the Asterisk is what your project settings are.

Now, here's the time format. You can now work in timecode. So If you're working on a video job, you've got Timecode. And of course if you're working on a film job, you're gonna use the Timeline in Frames. Now the Playhead Controls have gotten a rework. To show you that, I'm gonna switch to Input Two, where we have a moving clip. So this is still the Jump to the First Frame in the clip. If I pull it out and go Jump to the First Frame, this, of course, is Go to the Previous Key. This, of course, is Single Frame to the Left.

And this is Play Backwards. Here's Play Forwards. Now, here's a new feature. If I click Play Forward, it turns into a stop button, so I can just click stop, play, stop. You don't have to keep moving your cursor to find another button. And of course, this is the Step Forward One Frame, Jump to the Next Key Frame, and Jump to the End of the Clip. Now, there's been a major upgrade to the In and Out Points. First of all, if I turn them on, I can now simply drag them with the Left Mouse. Drag and drop that there.

And with the Left Mouse, click and drag to here. Notice that my first frame is now 20. My last frame is 80. And the duration of the clip is now 61 frames. But there's a second way you can set your In and Out Points. I'll jump the playhead here to Frame 30 and then click the I Button. That's the in point. I'll jump my playhead to Frame 70, click the O Button for out point.

And again, first frame, last frame, and duration reflect the current timeline. I'm gonna turn that off. As before, we can do a cmd + middle mouse + drag to select a frame range. And again, the first and last frames are updated, and my duration is updated. But we have a new thing over here. Here in the timeline range pop-up, it says Visible. Now Visible means that you have selected that little frame range.

Of course, Input, Output are the input, output points. Input, of course, still means your input read node. And Global means the full range of your timeline. But here's the kicky new feature, if I go back to Global, it remembers my Visible Range. So I can come down and select Visible again, and it jumps right back to what I had before. We'll put that back to Global. Last is the Loop Control. We have a new feature and some new names. Repeat used to be loop.