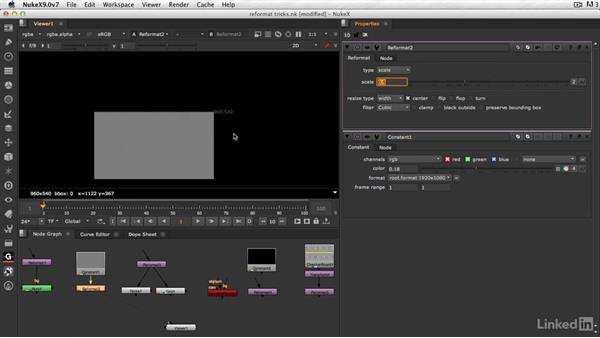 This NUKE tutorial demonstrates the many uses of the Reformat node for more than just reformatting images. How to set the size of Roto, Constant, and Checkerboard nodes are demonstrated as well as pre-setting the resolution of the Noise and Grid nodes.

- [Voiceover] Hi, this is Steve Wright welcoming you to this weeks Nuke Nuggets, A million and one uses for the Reformat node. The Reformat node is well known for resizing images. However, there are a number of other ways to use it that do not entail reformatting an image. If you need to brush up on the Reformat node you can learn all about it in my Nuke Essentials course Chapter 7: Reformatting Images. I have a variety of examples set up here and our project settings, if we click in the node graph and type S on the keyboard, are set for HD1080.

You have to turn on the Force This Shape button and then set that to 900. Now when we hook up our Roto node, wa-la. 600 x 900. We'll clear the property bin and lets take a look at this Constant node. Again, the Constant node is going to be set by the project settings and if you want something that's in the list off you go. But, supposing you wanted something that was exactly half res, well we can just hook up the Reformat node and set it to Scale and .5.

And there you have it. 960 x 540 which is half of our 1920 x 1080. Now there are several nodes in Nuke that have no option for changing their size so they're always going to be the same size as the project settings. For example, the Noise and Grid nodes. But we can do something with the Reformat node. I'll open up this Reformat node here and I'm going to set it to a Square 1k. Now, if we look at our Noise node we have a Square 1k.

Or if you wanted a grid that was a Square 1k you'e now set to go. Another use for the Reformat node is with the Scan-line Render node. Now by default the Scan-line Render node is going to render project settings. However, hooking up a Constant node overrides your project settings. So if the Constant node is set for the root format you're good to go. Or if you want to change the render to some other predefined setting, maybe you would like to see an HD720 render, you can do that.

It's critical though that if you use the Constant node it has to be Zero Black because whatever you render is going to be composited over whatever is in the Constant node. Another approach however, is just to use a Reformat node. So you can set the Reformat node to HD720 if you wish and you will force the output of the camera to be the new size. One last interesting use for it is this case here. I've got an operation that is introduced a bounding box.

Now it's critical that you manage your bounding boxes because Nuke is going to render everything that's inside the bounding box. Even if it's out of the frame. So, one way you can trim those back to the project settings is to simply add a Reformat node and bang, the bounding box gets trimmed to project settings. So there you have it. A million and one uses for the Reformat node from setting the size of a Noise node to clearing oversized bounding boxes. Be sure to check in next week so you don't miss out on my next Nuke Nugget.