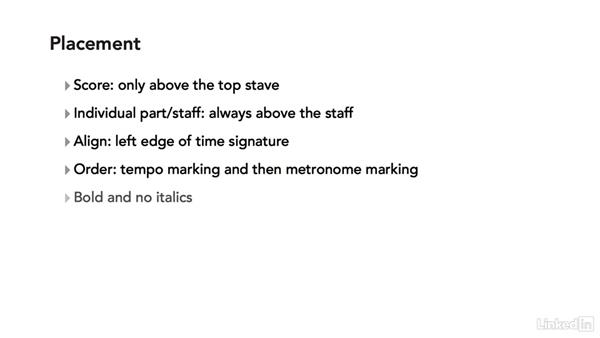 - [Instructor] One of the most important things to communicate to a group of musicians before the begin to play a song or composition is the tempo, mood, and style of the work. This is done with a combination of text and metronome markings. In the 17th century, we first start to see text markings indicating tempo. Then, in the 18th century, we begin to see regular use. In the 19th century, the metronome was invented. And we start to see both the metronome marking and a tempo text marking. Now, as we've been talking about in other videos, Italian terms predominate in the use of text markings and music.

That doesn't mean that you can't use your native language, and that other languages aren't used as well. Because German markings and French markings are used in European classical music as well. But Italian terms dominate musical language. And we use these throughout music. What we see in front of us here is just a list of Italian terms and their English translation. Then, over on the left hand side, we see a rough estimate of what the metronome marking would be.

In general, slow tempos would be largo, adagio, lento. And then, as we move to faster tempos, we would go to moderato, then allegro. Then, the very quick tempos would be vivace and presto. We also use tempo text modifiers, in addition to that. These terms can be used with other terms that we just saw to express more or less, in general, with one of those tempos. Molto or assai mean very, and con means with.

And piu means more, and poco means a little for example. This is how some of these might be combined together. Molto adagio is very slowly, or allegro assai would be very quickly. Let's talk about how they look in the score. In the score, they're only above the top stave. You can look in the notation program that you use for those items that you can display only on the top stave. But in the parts, they would go on top of the stave in each part. When you're aligning this, they should go with the left edge of the time signature.

This is something that I'll just mention, there's a lot of stuff that you try and communicate at the beginning of a piece. And sometimes, you need to move things around to accommodate what you're trying to do. But, first and foremost, you left align this with a time signature. Then, if you decide to use both the tempo marking and the metronome marking, the tempo text marking goes first. And then, the metronome marking comes second. In terms of the style, you're going to bold and not italicize the text you're using.

They should be as large or larger than any other text expressions that you're using. Here's a score example. And this particular tempo text marking is pretty complicated, this andante piu tosto adagio. All of that just means a tempo that's somewhere between andante and adagio. But as you look down, notice that's only showing above the flute part; the top part in the system there. Then below that, you see the second part, oboe.

And you do not see either the rehearsal mark, or the tempo text mark, or metronome marking displayed there. Here's a second score example to show you that as well. Here we have allegretto vivace which is going to be quick. And notice that, in this one, instead of seeing a quarter note equals and then a value, since we're in six eight, and this is pretty fast, we're going to feel this in two. Instead of seeing an eighth note, we're seeing a dotted quarter equals 126. Then, we have another tempo text marking that appears a little bit later here, or it's a little more about mood.

That's this dolce e leggiero. That basically means sweetly and lightly. In some scores, you just put a metronome marking. Here we just see a quarter note equals 117. I would suggest that that's not the way to go. You would like to give more of an indication of the feel. This is a contemporary, popular music example. It would be great if it said something like rock, or soul, or funk, or anything there to help the musician kind of get into the head space of the kind of music they're about to play.

At least there's a metronome marking to give them a tempo. In some cases, a style of music actually indicates a tempo. For example, waltz tempo, or what we see here is tempo di waltz, indicates to the musician a range of tempos. Waltz tempo is somewhere in the high eighties to mid-nineties. They immediately know a range that they're going to play in. Then, here at the end we see a style indication as well funk. The, we pair that with a metronome marking.

And that's really the best policy because this is going to give the most effective result. Every composition, song, lead sheet, score should begin with an indication of tempo or style. These simple text markings allow the musician to draw upon their experience of style and mood from all the other music that they've ever performed. The result is that they'll likely play closer to the intended tempo, style, and mood the first time through the piece.