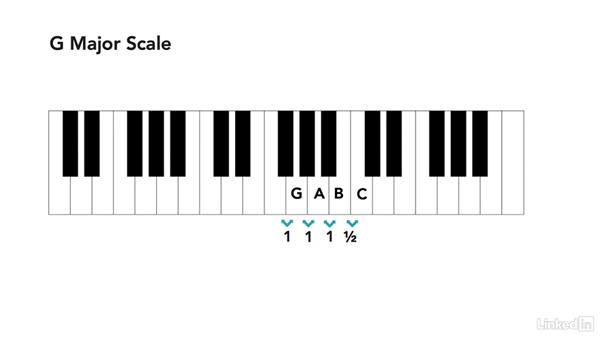 Join Rick Schmunk for an in-depth discussion in this video Scales and intervals, part of Learning Music Notation.

- [Narrator] In preparation for our upcoming discussion about key signatures, it'll be helpful to brush up on basic intervals and scales. Most western music, popular jazz, and classical is considered to be in a key where one of group of pitches is central, the note towards which all other notes tend to gravitate or resolve. The central, or tonic note, is often the final resting note at the end of important phrases and the song. So there are two primary types of keys in western music, major and minor.

Let's start by identifying the structure of a major key. In a major key or scale there are seven notes and each letter name gets used a single time. For example, you wouldn't use a D flat and a D in the same scale, instead you'd use a C sharp and a D. The key of C is a good place to start because there aren't any sharps or flats in the key of C. So, let's look at this piano graphic as we talk about this. This'll be helpful. From C to D if we measure that interval, there's a black key in between and from a white key to a black key it's a half step, and from a black key up to another white key would be a half step, so the combination of going from C through C sharp up to D is two half steps, or what we call a major second.

That would be one whole step. So, a major second is equal to one whole step. If we look at the distance from D up to E, it's similar, right? Because there's a black key in between. So we know that that's a major second or a whole step. But when we get to the distance between E and F, we can see on the piano keyboard that there is no black key in between those two notes, so that distance is a minor second, or what we refer to as a half step.

The next one we know is also a whole, so we're gonna go through the black key to the next white key which is going to give us B. Then, the next one we know is a half step, and it's convenient here that there's no black key between B and C, so we know that if we go just a half step, that's gonna take us right to C. Then we need three wholes in a row. So I'm gonna go from C up to D, that's a whole, and from D up to E, we'll go a whole, and then we need to go one more whole step, but if we look at our keyboard here, we'll realize that there's no black key between E and F so we need to go from E to F up to F sharp.

Now I'm not going to use the note based on E and I'm not going to use the next note based on G, because we have to go through each letter name once. So the next note needs to be named F, so in this case, it's gonna be named F sharp because we're gonna go from E to F, which is a half, and from F to F sharp which is a half, so the total distance is a whole step. And then we'll finish this off by going a half step back to the note we started on because we always start and end on the same note in a key. And that's gonna take us a half step back to G.

So the key of G is said to have one sharp, F sharp. And if we were to write it on a scale, it would look like this. No accidentals except on the note F, we see that preceded by a sharp sign. All right, so let's do one that should end up with some flats. Again, our formula is whole, whole, half, whole, whole, whole, half, all right? So we need to go a whole step from F, that's gonna take us to G, right? Because we've got a black key in between.

And another whole, that'll take us to A. But now we need a half step. So we're gonna need to go from A up to the next black key, but we're not gonna call that by the letter name A because we've already used that in the scale. So instead when we go a half step, we're gonna call that B flat. Now, from the fourth scale degree up to the fifth, we need to go a whole step. So we're gonna go from B flat to B natural, which is a half and then we're gonna go up to C which is another half and that's gonna give us the whole step to get to the next note in the scale.

Then we need another whole, so that'll take us to D. Another whole that will take us to E. And then we'll finish off by going a half step back to F. So the key of F has one flat, B flat. So here we see the F major scale notated on a staff and we can see that there's one accidental. There's the flat before the B flat. So let's do one together on the staff and let's do the key of D. So I'm gonna start off with D.

And I need to go a whole step, so I'm going to go through the accidental. I know that there's a black key between D and E. So, I'll go up to E for my next note. Then I need to go another whole step. And I know that the distance between E to F is a half, so I'm gonna need to go another half. So that's going to take me to F sharp. Because F has to be the next letter name used in the scale. Then I'll go a half step. So I can go a half step from the black key F sharp, up to G.

So there we have our D major scale. So D, E, F sharp, G, A, B, C sharp, and D. And so we would say the key of D has two sharps. So get out some staff paper and practice writing out scales. Try the sharp keys of A and E then the flat keys of B flat, E flat, and A flat. That will get you through keys that have up to four sharps or four flats.