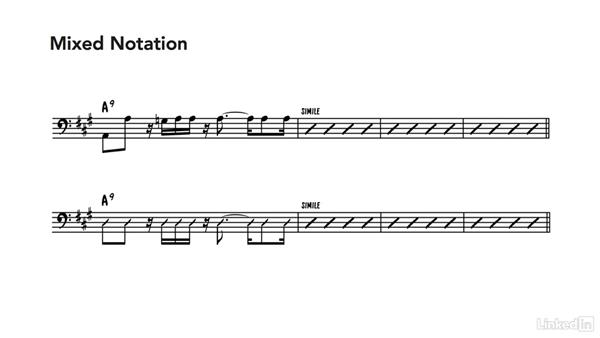 - Slash notation is a great way to notate simple chord-based parts for guitar, bass, and piano. But at times, it's just to ambiguous to communicate your musical intent especially in respect with rhythm. That's where rhythmic notation can bridge the gap and help to effectively notate rhythm-section parts. So with rhythmic notation, there's a need to indicate a specific rhythm, but no need to indicate a specific pitch. So the chord progression can provide all the pitch information. So we might use rhythmic notation to notate something like a strumming pattern.

So here what we're looking at is conventional notation where the note heads have just been changed to slashes. The chord changes above the staff give us the pitch or chord information, and the information in the staff gives us the rhythm that needs to be played. You might also use this in a place where you've written ensemble rhythms and big chords, and you want everybody to play the rhythms together and also the rhythm section needs to make sure that they play the same chords that are voiced out for the horns and saxes or the other instruments that are in the band.

Also you might need to enhance a slash notation part with a little bit of rhythmic notation because you need to indicate a push that is shorter than a quarter note. So here in this measure we see we've got three slashes for beats one, two, and three. And because we need an eighth note push or anticipation going into the next bar, we've indicated two eighth notes in rhythmic notation. So you simply notate the rhythm with conventional notation, and then depending upon the program that you're using, you convert the note heads into slash note heads.

So a program like Finale does this using something called staff styles, and a program like Sibelius does this either with a plugin or by just using one of the quick keys to change the note heads. So as we've seen, the slash note heads are centered in the staff and they're slightly shorter and thinner than that diagonal hash line that's used for slashes. So you might start off a part with the actual pitches written out to give an indication to the player what you want them to play.

So here we see in this first measure of this bass part a sample bass line written out with conventional notation. We see the chord symbol above that so the player can analyze that in terms of the harmony and know what they're supposed to do. And then we see the term simile indicating that they should just continue to play a similar part. Now, we might go on to something else in the song and then later need to return to this part. Well since we've already notated the pitches and the players have seen that, they don't really need to see the exact part again.

So on this repeat we actually might show rhythmic notation instead. So I've just taken what we see in the first line and converted that into rhythmic notation. The player sees that and they're reminded of the groove that came earlier, and they can get back into that quickly and continue to play that. So let's look at an example where we put all this stuff together into one part. So here we're looking at a drum part. We get an indication of the style. Then in the first two measures we get a sample beat.

And we get a dynamic indication on where to start off. And then instead of using hash marks or slashes in measures three and four, we can actually use our two-bar repeat saying, "Hey, repeat those two measures." Then we continue with hash marks. There's no simile mark in here, but most players would look at the slashes and realize there was a simile marking up here so I'm just going to continue to play that. Now, in the last measure of this line we actually see notes within the bar.

So the player knows that they need to switch to the indicated part, in this case playing a low tom and a high tom together with a forte piano on the beginning. Remember that that means to hit it hard and then immediately drop down and then uses crescendo to swell back out to beat four where we have this accent on that last quarter. Then when we start the next section, we see an indication of the pattern again going into simile. Then at the end of the bar we've used rhythmic notation to indicate that there's a push going into the next line.

And then in the last two measures of this example, we see an ensemble rhythm written in rhythmic notation so the player knows that they need to accent this particular rhythmic pattern. And then going into the next section, we see the indication for fill and then this dotted line indicating that they want to fill over these last two beats. So combining a small amount of conventional notation with slash and rhythmic notation can result in really effective rhythm-section parts. It enables you to communicate intent while allowing the players to bring their musical experience and ability to the performance.

Best of all, the players aren't forced to constantly read their parts and instead they listen and work together.