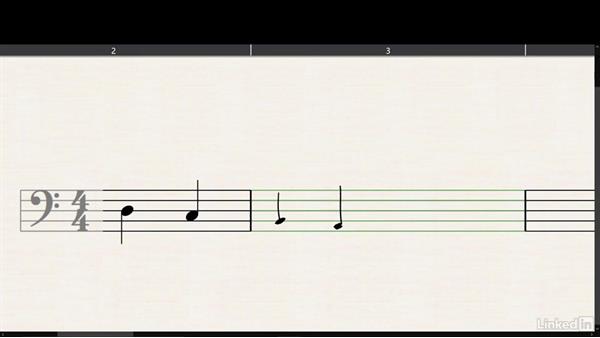 - [Instructor] In the last video, we learned that the clef sign at the beginning of the staff tells us the general pitch range of the staff, and more importantly, gives us a specific pitch as a point of reference. And we learned that the treble, or G clef, is used for notating music in higher range. Let's discuss how to notate notes in a lower range using the bass clef. So this is what a bass clef sign looks like, and the bass clef is also known as the F clef.

And just to clarify this, remember that C here is in the middle of the piano, and if we go lower, which would be to the left, the F that's the second line from the top in base clef would be the F below middle C. Now if you wanna practice drawing this on some staff paper, you would just draw a curve, and the dot, and then the dot above, and the dot below. Okay, so practice that until you get good at it.

Now I'm gonna get rid of that because I've already got a clef sign over there to the left. So we know that the note on the second line is the F below middle C. If we go above that, we would go F, then the next note in the alphabet, right, would be a G on the space. Then if we go to the line above that it would be an A. The space that sits on the top of the staff would be the B below middle C. And if we go below that, starting with F, go backwards through the alphabet, we'll get E on the space, D on the middle line, C on a space, then B on the second line from the bottom, A on the bottom space, G on the bottom line of the staff, and then F which would be on the space below the staff.

Again if you're trying to remember all this stuff, it's helpful to have a mnemonic to help you with. So for example if I draw the notes on lines, which are gonna be G on the bottom, B on the second line, D on the middle line, F on the second line from the top, and then A on the top line, that's going to give us G, B, D, F, and A. And a lot people will use the mnemonic, good boys do fine always, to remember those notes.

We can use ledger lines in bass clef just like we used them in treble clef. So if we want to go above this A that's at the top of the staff, and then the B that rests on it, we can add a ledger line, that's gonna get us to middle C on the piano. And then if we go above that on a ledger line, we're gonna get a D. If we go below, if we go to the G on the bottom, and then the F that rests on the space below the staff, we can add one ledger line and draw a note on that.

That would give us E, and then the space below that would give us a D, and then if I wanted to go even lower, I could go two ledger lines, and that would give me a C. That's two C's or two octaves below middle C. So if you play an instrument like bass, cello, trombone, and tuba you'll spend most of your time reading in bass clef. But even if you play an instrument that is notated in treble clef, you'll likely be handed music in bass clef at some point, and be expected to read it.

So get some music, like the Bach Cello Suites, and practice reading in bass clef.