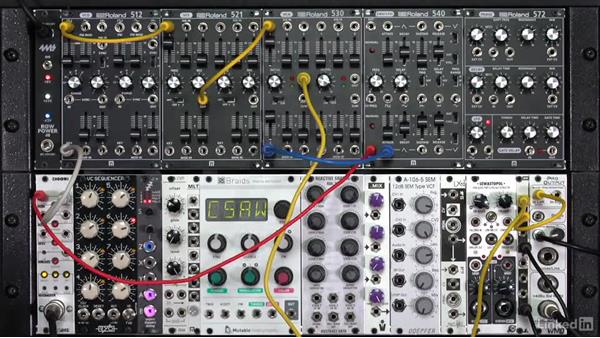 - In this chapter, you're going to learn the most common approach to creating sounds with a module synthesizer called subtractive synthesis. That's where we start off with a tone source, an oscillator, that has a wide spectrum of harmonics, pass that signal through a filter to filter out or remove some of those harmonics, leaving just the ones that we want, then pass that signal through an amplifier to shape the loudness of an individual note. We'll use envelope generators to do that shaping of both the loudness and which harmonics are being removed, and we'll use other modules like LFO's, low frequency oscillators, to modulate, or vary over time other parameters to add more life to our sound.

Now in this particular movie, we're going to patch together a subtractive voice from scratch. In the later movies inside this chapter, we're going to dive into each module in much more detail so that you can use them to create the sounds that you want. Now in this particular case, I have a midi controller. I already have it plugged into my midi to control voltage gate converter. You need to make sure that this is receiving midi messages on the same channel that your controller is sending messages. When they are, when you play a note, you'll these LEDs light up to tell you that it is indeed hearing the individual notes.

Next, I need to take the control voltage out of my midi interface and run it to control voltage input on my oscillator. It's called the key on Roland 512 to let you know that's where you control it from you keyboard. So I'll plug in from my CV out to my key input, and then I'll run a cable from one one of the wave forms, I'll just pick one to start with here, we'll talk about these in more detail later, and plug it into my output. And there is a pitch for my oscillator.

Controlled from my keyboard. I can change what octave I want to use on my oscillator and the keyboard also has octave up and down controls. Now a sustained tone like that is very boring, so I take that audio out and instead move it to the audio out from my filter. Then, I'm going to route the waveform for my oscillator into one of the inputs on my filter. I'll turn up the input volume on my filter, and you hear a very muted version of that waveform.

As I control the filter, I change which harmonics from that oscillator are getting through to my audio output. Pick something around there. OK. I can play that from my keyboard, but it's still just sustaining indefinitely. I want to shape individual notes. To do that, I'll move further down the line, take an audio output from my voltage controlled amplifier, then take the output from my filter and run it into my amp.

I'll turn up the input volume on my amp, and some voltage controlled amplifiers, VCAs for short, have an initial level where they can go ahead and allow signal through without any voltage coming into them. But it's far more interesting when you can have the notes that you play in your keyboard trigger and shape these individual notes. Turn that down, and do some more patching. I'm going to take the gate output from my midi interface, let's me know when a note is being held down, and use it to trigger an envelope generator.

Something that creates varying voltage in response to a gate signal. I'll plug into the external input. The Roland 540 also has a button I can press to manually trigger it if I want to, then I'll take an output from the envelope generator, and I'll plug that into the modulation input on my amplifier. I'll turn up it's control voltage input, and when I play notes, I get my individual notes articulated through the amplifier.

Now we can add more interest to the sound. For example, the harmonics stay the same. We can patch up a second envelope generator to create more motion to that sound. To do that, I need to trigger the second envelope as well, so I'm going to need to create a multiple, or a duplicate, of my gate signal. I'm going to use what's called a stackable cable for that, because I can stack one cable into the back of another, and they're connected together now. So now this one gate will trigger both envelopes.

Then, I'll take the output from the second envelope and run it into one of the modulation inputs on the Roland filter. I'll turn up the modulation input, and now when I play a note, You can hear the harmonics change over time articulated by the envelopes. I can go ahead and change the times with this.

Now if I want, I can keep going and add even more life to the sound by using different modules inside my system. For example, I have a module called an LFO, a low frequency oscillator, a voltage that varies over time. I'll take one of it's outputs, like it's triangle wave that will go sharply up, sharply down, sharply up again, and plug that into another modulation input on the filter. I'll hold down a note, raise this level on the input, and you can hear how it's modulating varying which harmonics are being filtered out.

You can change the speed. How deep it is. I might choose something more mellow. You'll have a little bit more interest to notes as I play them.

Maybe a little bit less. OK, I admit, that's not the strongest sound in the world, however, if you've used synthesizers, you know that a whole spectrum of different sounds are only a few knob tweaks away. So let's see what we can do quickly with this patch. First, I'm going to set up an arpeggio on my keyboard, and let's tweak around a little bit. First, I'll remove the contribution of the LFO. I'll turn down it's modulation mount.

Focus on the filter cutoff and it's envelope. I'm going to make this a little faster of an envelope, a little snappier, and I'll raise the sustain level so that after it finishes that decay, it holds the note at a higher level. OK, with that, let's tweak the frequency. I like that already, that's a cooler sound, now what can we do to make that LFO sound a little bit better? Let's slow that down.

A little higher than that. It opens up to a very bright sound. And then as the LFO cycles back down, it modulates the filter cutoff frequency back lower again. Let's try adjusting the decay rate on the filter. We're just a very brief blip on the attack. Just add that percussive attack.

A little bit less mount and we're there. And that is the basic subtractive synthesis patch. Now let's go through each module in detail and learn more about them, and how to tease more out of them to get the sounds in our head.