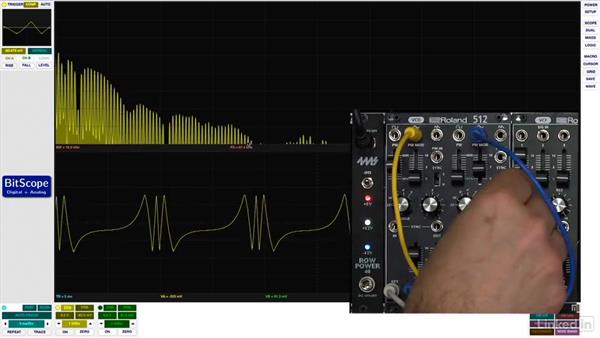 - Next we're gonna tackle frequency modulation, FM. Now I know we kinda did frequency modulation back when we did vibrato, and had an LFO alterating the pitch of an oscillator, but the traditional frequency modulation technique involves two oscillators both running at audio rate, and one, the modulator, driving the frequency of the second one, the carrier. Now you can do FM with virtually any synthesizer, but to do it properly, the way that it was originally done back by John Chowning, you need a special type of oscillator that has a linear FM input.

We'll explore both versions of the technique here. I'm still using the control voltaging gate out of my keyboard. I hate my gates running to some envelopes in case I need them. I have the control voltage running to my three different oscillators: the Roland, an oscillator inside the disting, and my digital oscillator, the braids. Now FM usually involves creating some very unusual harmonics. So I'm gonna start with waves that have relatively simple harmonics: triangle waves. I'm gonna take the triangle wave out of what's gonna be my carrier, plug it in to my VCA, and we'll turn up the initial amount on that VCA so we can hear our signal.

Then I'm going to take the triangle wave from my second oscillator and use it as a modulating source, to drive the frequency of my first oscillator. Now initially, nothing's going on, but as I increase the modulation amount, you hear some interesting things happen to the waveform, and you'll see the harmonics change on screen. (electronic sound changing pitch and tempo) Let's try to fine-tune the oscillators here.

Now this is exponential FM, because I'm taking the wave shape of my modulation oscillator and driving the normal one volt per octave input of my carrier oscillator. As you can tell, it's kind of tricky to tune. Every time I change the modulation amount, the oscillator changes pitch. And likewise, if I change the tuning of the second oscillator, again, things change.

You hear this as a different interval now, different pitch. This is what makes exponential FM difficult to work with, you're always chasing your tail tuning. Let's tune this to a higher pitch. As you see we get some unusual waveforms, and some unusual spectra.

(electronic tune) Once you at least tune the oscillators, they do track at least. Now if you want a better idea of what's going on, let's change the modulating oscillator to a square wave, so it'll be driving the pitch of the carrier up then down again. I'll turn on my VCA so you can hear it. You can see from the waveform what's going on, it's alternating from a very low-pitch waveform, these flat areas, and a very high pitch waveform, the very busy areas.

Let's cut down the modulation amount. So it's very hard to tune properly. There we go. Very unusual harmonics spectra too, you're seeing some unusual spikes for example, the strongest harmonics are not the fundamental. Again, if I played normally.

Am unusual reedy, but metallic, plucked sort of sound, kind of hard to describe, but something very different that you normally get from an oscillator. Different waveforms create different sounds. Now the problem with the exponential approach, is that you would really like to dynamically alter the FM depth, how much modulation is hitting that carrier oscillator. Let's patch that up quickly. I'm gonna go ahead and take my sawtooth wave out, into my second VCA, take the output of that VCA, have that again modulate my carrier oscillator, then take the output in one of my envelopes that I've been saving here, and have that drive the depth of the FM, envelope the amount of the modulating oscillator going into the carrier oscillator.

Now when I play a note you'll hear it zip through these different harmonics, different tunings. Now if you're trying to make noisy, drum-like sounds, the pitch changing during the attack, during the changing modulation depth, is really useful. But if you want more predictable, tonal frequency modulation, then you should explore linear FM. And that's what we're gonna do next.