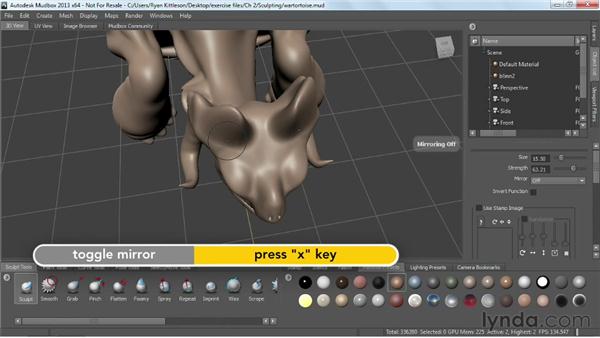 Now that we have all the basics covered, its time to get into the real reason Mudbox was created, all the fun sculpting you can do. Sculpting is fairly straightforward, you can just pick up a tool and start doing it. However, there's a few settings and controls that I'm going to show you that really put the power of Mudbox at your fingertips. Let's open up the exercise files, Ch 2 > Sculpting > wartortoise. Now let's pick the Sculpt Brush from the tools palette.

Go ahead and play around with it to get a feel for how it responds to pressure sensitivity and how it deforms the model. I am going to increase the size of the brush a little bit, Ctrl+right-mouse button, or right-tablet button, and so you can see you can just build up shape and volume on the model by sculpting. I am going to zoom in a little bit on this so we can see it more close-up, and let's shrink the brush a little bit, Ctrl+right-click. All right, let's hold down Ctrl while we sculpt. The difference here is, now it's pushing in instead of pulling out.

Any brush that builds up volume while sculpting will do the opposite if you hold down Ctrl. Now we've already experimented with changing the size of the brush, but just as a quick recap, we want to hold down Ctrl, and then use the right button on the mouse, or on the stylus, and just move the pen, or the mouse, up and down, and you'll just change the size of the brush this way. We can also change the strength of the brush by holding down Shift and using the right button, and you'll notice this little bar going up and down, that's the strength of the brush.

So if we set it really low, you'll see that not a lot happens when we sculpt. Hold down Shift and the right button and raise that up, and you'll see you get a much more pronounced effect. There's another way to change the size of the brush, and that's just by holding down the Spacebar, and you'll get this little pop-up here where you can click and drag on either of that circle, to change the brush size, or holding down Spacebar again, click and drag on the bar to go up and down with the strength, or you can also just over here to the Properties panel and just increase or decrease this manually.

Now let's take a closer look at the Brush properties. Below Size and Strength there's Mirroring, so you can set this to mirror any brush strokes that you make across this axis, and you can set it to various axes, usually X is something that you want to use, most models are aligned to the X-axis. So Mirroring is now turned on, so let's see what happens when we sculpt. I'm going to get a better view from the top so we can see this. I am going to shrink the Brush size a little bit.

Now you get the exact same thing on both sides of the model. I use Mirroring all the time, so I set up a hot key on the keyboard, you just hit X to turn it on and off. So hitting X and Mirroring is now off, hit it again, and it's back on. I set this so that I don't have to come over here to the Properties every time I want to turn Mirroring on and off, I can just use the hot key. Below the Mirroring is Invert function, so basically this is the same thing as holding down Ctrl, it's going to dig in rather than building up.

We will talk about Stamps later on for now, I am going to skip that and go down to Stamp Spacing. Now when you sculpt with a brush, it may look like one smooth continuous stroke, but it's really made up of a series of stamps. If you turn off Stamp Spacing, the brush will stamp out as fast as it can. So let's see what happens when you do this. I am going to shrink the size of the brush too a little, and it's brush really fast you could see there is kind of gap or spaces between the different stampings of the brush, that's because the computer can't quite keep up with how fast I'm moving the brush.

I will turn Stamp Spacing back on, you see you are going to get a continuous smooth stroke. So I am just going to undo that, it's kind of messy. You can also change the Stamp Distance, so if you want more space between those stamps you can really crank this up. Now let's see what happens. So now we get a regular space between all the stamps, no matter how fast or slow we move the mouse. That can be useful if you want a regularly repeating pattern. The lower the number the more continuous the stroke is going to appear. So let me undo that, and you can see now you get a fairly unbroken stroke.

Let's go ahead and undo that, and let's go down to Steady Stroke, and this is kind of fun. Steady Stroke is a way of smoothing out the jitters in your hand. If you trying to make a really clean straight line, and your hand shakes too much, try turning this on. It'll average out the cursor positions for a smoother line. So let's see what happens when I use this. I am going to decrease the strength of the brush a little bit, holding down Shift and right button, to bring the strength down. So a Steady Stroke, you see before any stroke happens, you get kind of this little preview of the direction that you are going to move. And now as you stroke--it might not make a lot of sense as you're watching it--but if you're experiencing the stroke as you're doing it, you'll notice that it's a lot smoother and had a lot fewer jitters in it.

The Distance setting on the Steady Stroke will increase or decrease the amount of Steady Stroke. So you might want to experiment with it and see what works for you. There are a few more settings, but they're either covered in later videos or are rarely used. What I've shown in this video is the settings that you'll be changing on a regular basis to customize the way in which a brush behaves. You'll find that adjusting these settings can save you time and effort, especially the Mirroring which saves you from having to do the same sculpting on both halves of a model separately.

7/26/2012
This course introduces Mudbox, the Autodesk digital sculpting suite, and teaches digital artists how to create realistic assets in Mudbox, including 3D characters, immersive game environments, and product designs. Author Ryan Kittleson focuses on modeling, sculpting, and texturing, as well as topics such as extracting normal maps and exporting assets to Maya and 3ds Max for further rendering and animation. The final chapter covers techniques for showcasing your work in Mudbox.
Topics include: