Introduction to joints and posing 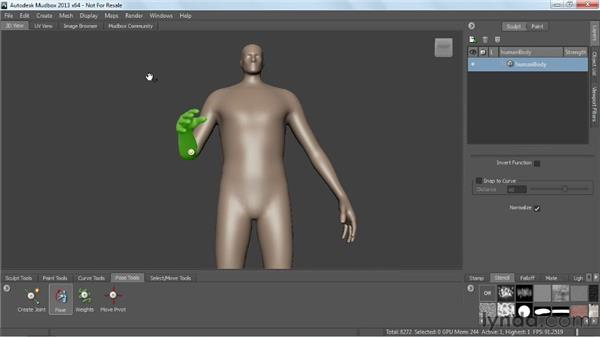 Mudbox allows you to create a simple bone structure inside of a model and use it to pose a character. I'll warn you that from the start, it's only meant to do basic posing. If you want something complex or highly refined, you'll be better off rigging in a program like Maya or Softimage that has dedicated rigging tools. Then you could import the rig model to Mudbox in the FBX format. For basic tasks like testing out different pose ideas or just simply to adjust the angle of an arm, for example, Mudbox can get the job done quickly.

Let's see how it works. Let's open up the human body that comes with Mudbox. Let me just adjust the view so we can see the whole character on screen. Now let's go to the Pose Tools tab, and we want to create a new joint. Let's take a look at the options before we do anything. Let's turn on one joint at a time. This is a setting that puts Mudbox in the most basic posing mode. It should be called quick and dirty mode, really. Let's try it out in this mode first. Now let's zoom in on the neck of the character. I'm just going to try to get up here closer.

Let's just click and drag up towards the head. Now you may notice as you hold down the cursor and move around, there are two things that Mudbox is doing. One is it's showing you a blocky line that will separate the parts of the model that will be affected by this joint from the parts that won't be. And second it's showing an arrow. The longer you drag the arrow the softer the transition will be between the affected and unaffected areas. So let's just try it. I'll release the mouse here, and let's see what we get.

Now that we've made a joint, let's go into Pose mode. I can just click and drag on it to rotate around. We can also middle-click on it, and it will scale. So you could kind of stretch out proportions this way. If you hold down the Shift key it will scale proportionally. Now let's go make a new joint. When we've got one joint at a time turned on, any new joint you make will replace the currently existing joint.

So let me zoom out a little bit, and let's make a new joint at the elbow, and let's go back to pose. So now the joint we made at the neck is gone, and we could pose at the arm instead. Be careful when using one at a time mode, because if you have an already existing skeleton on your character, and you've used that mode, it's going to erase all of your existing joints. So you may want to play around with creating joints and making really soft transitions like with a really long arrow like this, and now if we pose we get a really soft deformation.

Now let me just undo that, and I'll create a new joint, and I'll make it with a really sharp transition. So just a very short arrow, and let's pose that. So you can see you get a much sharper transition. So let's look at some more of the joint creation settings. Under Placement, there are two options: Interior or Surface. Most of the time, I leave it on Interior because it places the joint in the inside of the anatomical structure, which is where joints are on real people.

In some special situations you might want to place the joint on the surface. Not really sure when I would use that, but if you know you need to do that you've got that option. The last setting is Weights. This is how Mudbox determines which parts of the model will be affected by a joint. By default, it's on Automatic, which does a pretty good job most of the time. Another setting is Topology. I haven't really found a use for this setting. It behaves mostly like Automatic but just not as well. There is another setting called Click and Paint.

So with this you could create a joint, and then while you're holding down the key, you just drag around, and it creates an affected area that you can paint right after you create the joint. So now you could go into Pose mode--we'll just zoom out a bit. Go into Pose mode and rotate that section around. Sometimes this comes in handy, but I don't really use it very often. Back into Create Joint, we'll look at the last Weights mode is None.

The None mode is usually for when you're making several joints at once, and you want to go in and manually paint weights afterwards. I'll get more into that mode later on. For now the important thing to understand is that joints are a great way to pose or even just make adjustments to the design of a model. Generally the result you get from posing won't be final, you'll probably have to go in and manually sculpt some areas that didn't get posed just right. So for example, here on the elbow you may see that it looks a little bit noodly. You might want to go in and sculpt this to help solidify that joint angle.

So even though there might be some fixing to be done, joints are a great way to get started with a pose.

7/26/2012
This course introduces Mudbox, the Autodesk digital sculpting suite, and teaches digital artists how to create realistic assets in Mudbox, including 3D characters, immersive game environments, and product designs. Author Ryan Kittleson focuses on modeling, sculpting, and texturing, as well as topics such as extracting normal maps and exporting assets to Maya and 3ds Max for further rendering and animation. The final chapter covers techniques for showcasing your work in Mudbox.
Topics include:

Video: Introduction to joints and posing