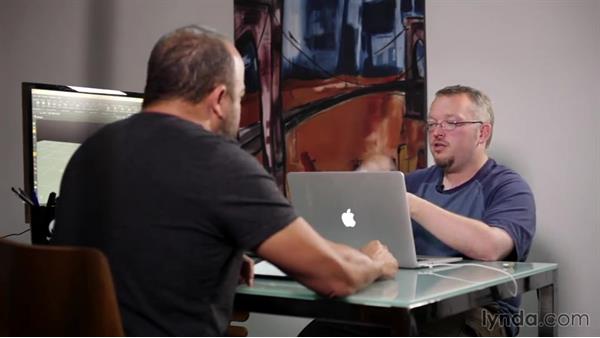 Join Rob Garrott for an in-depth discussion in this video Part 3: Future challenges, part of Artists and Their Work: Conversations about Mograph VFX and Digital Art.

- So now you've crossed another barrier mentally from fine artist into the programming world. You've built this tool, but you've used a computer to do it. - It's sort of surreal to me, to be honest, that I'm doing programming of any sort. Houdini allows you to do stuff without programming in a traditional way. - Actually writing code. - Because you can literally use these nodes. Essentially each one of these pieces are like a block of code, so you're stringing code together.

- As you connect the nodes. - Yeah. So luckily I didn't actually have to know much in the way of programming at all to do this. It was more just, weirdly enough, it did come from an artistic side where I was looking at, "What's happening there?" If there's two things that are attached and they come apart, I know that's where the dust should come from. I don't know how to make it do that, but I know that's where it should happen. Then I would go and talk to a programmer and say, "How would I do that?" They would say, "What if you just check to see "if you have piece one and piece two "and they're next to each other "just check to see if they're "not next to each other anymore." I was like, - As a question.

And then that makes perfect sense. Yeah, right. If they're no longer next to their buddy, then they broke. Surprisingly, you can go from that basic idea into a tool. It only took me a couple of days to actually prototype it. It gets a pretty cool kind of result. Let me just go back into our debris sim here.

Just merge these guys together. I just wanted to bring in this ground plane that you see here, because all of our debris was actually just falling infinitely through space. - All right, now it will interact with the ground. - Now it will actually hit on the ground and give us a much more interesting look. This is where I would start. I've got something that looks kind of neat. Then it's just like, yeah, how do we make this look cool, like light it, put textures on there and stuff.

That's a much more laborious stage. - Elaborate process. - Yeah, absolutely. - But the basic idea, it's fun to play around with an idea and see if you get it to look real, but also cool. - Now that you've crossed an important technical and mental threshold, what's next for you? What do you see as your future challenges, things that you want to do, or things that you know you're going to have to do at some point? - That's an interesting question, because I've kind of just been making it up as I go along, at this point.

So I don't know, but I've worked at Side Effects for about four years now. So now it's like, "Wait, I have a job." This is actually a job. What do I do to keep pushing myself? Right now, the thought is to really, I mean what I would like to do. I don't even know if Side Effects likes this idea. But what I would like to do is really try and push this and build some content that maybe is like what an animation studio would do, or is like what a professional studio somewhere would do, but do it internally.

Have it as an example of, here are all these problems that productions run into, and let's see if we can solve them. Let's see if we can fix those before they ever get out there into productions. Part of my job, apart from building this stuff, is to go and talk with studios. I go and talk and I travel to various, I was just in Japan and Singapore. I may be going to China later, to visit customers, basically. Half my time there is they're like, "We have a dragon and it's coming up out of the ocean.

"How do I do that?" Usually the answer is, "I have no idea." But they run into typical issues. Sometimes I think we should maybe try and do a small project, so that we run into those problems. So then it's like an internal thing. - It sounds like the big part of your day, your daily work is solving problems, which I guess is true for any artist. You're presented with a creative challenge, and you have to figure out a way to get there. - Exactly, yeah. Exactly.

That's what's really kept me interested. Because I honestly didn't think I would work at Side Effects for more than a couple months. But then once I started working there, it's like every day it's this new, interesting problem that is a weird connection between, this has to work and it has to be consistent, and you have to be able to show other people how this works, but it also has to be cool. Every day really is like, you've got a strange problem from who knows, a customer, or even just somebody in the company, and you're like, "Yeah, I never even thought of that before.

"You're right, how do we do that? "I have no idea." And then, okay, let's spend the next week tearing that problem apart and see if we can figure anything out. - Excellent. Now that you're in this position with a job, and creating these simulations and solving problems for other folks, how do you keep your creative skills up? Do you still draw comic book art on the side? Are you still that fine artist? - It is sort of always a struggle.

I have this job with specific goals and specific problems to solve for the job. Sometimes they're not super creative. Sometimes it's just like, "We need to do this." There is this idea that I go home and then it's like, okay, now I've got to do my own thing. Luckily, sometimes they can overlap. I can have this cool idea that I want to try, and then at my job they're like, "Yeah, go ahead, because that would be cool." But still sometimes it's like, "Oh, you want to do a comic book "about a serial killer? "No, that doesn't help us at all." So yeah, I like to try and keep myself creatively autonomous, so I can still do my own thing and feel like I have the freedom to do that, and that usually means doing it outside of work.

But luckily, my job is creative on both sides, from personally and at my job, so they don't conflict all the time. I can do my own thing in my free time to keep those creative juices going, where I have no constraints, do whatever I like. But still get some nice, real world feedback at my work. - Excellent.