Part 2: Into the visual effects industry 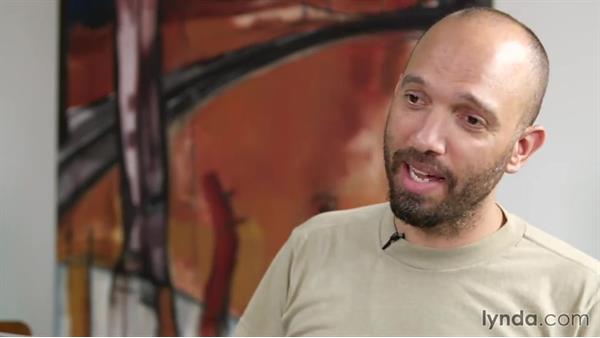 Join Rob Garrott for an in-depth discussion in this video Part 2: Into the visual effects industry, part of Artists and Their Work: Conversations about Mograph VFX and Digital Art.

- What projects did you work on from Square? - Just Final Fantasy: The Spirits Within. - Ah, wow. That was a groundbreaking piece. - It was groundbreaking. There was a lot of blood, sweat and tears, and a lot of it ended up on the cutting room floor. (laughing) Though, everyone worked together and created a nice product. - That was really incredible. You look at the still images of that movie. They are stunning.

Absolutely stunning. But then, as soon as they started going into motion, that's where you ran into the problems, and I think a lot of folks had a hard time getting past that. - Some of the technology made at Square went on to make their own products, like, I think, SciFlex, which is a clock solver, came out of Square. Also, some of the techniques and textures for facial resolutions of textures and whatnot came out of there, because there was a lot of care put into that, like pores, skin, tiny hairs.

- What did you transition to after that? - I ended up in Los Angeles and worked at Digital Domain for about four months doing rendering, which I guess you can kind of take as a step down, if you have a "hierarchy" of artists and technicians, but it allowed me to get a firmer technical hold. - Really, you took what some folks would be considered a demotion, but really, it was almost a way to sort of garner a new set of skills as a render angler, which is an incredibly important part of the process.

When we work on computers, that data has to go somewhere, and it's the most important part of the process, is that data, because without it, there is no film, there's no commercial, there's no animation. - There's a lot of work behind the scenes and under the scenes making a movie. Whatever you see on the screen is not what came out of the artist's computer. There'll be dropped frames, there'll be assets that just disappear for no reason, so you need paint roto.

You need render anglers to put all that together, because the systems are just built by humans and we're imperfect, so the things we make are going to be imperfect. - Did you find that, you know, once you were in that position, was it easy for you to sort of make the jump back into compositing? Or did you have to go back and prove yourself all over again? - I did kind of have to prove myself all over again. After Digital Domain, I went in Orange County, Southern California, for about six months, I was a graphic designer redoing medical forms.

- Oh, wow. - Yeah, it gets kind of rough sometimes. You just have to get the work where you can. (laughing) - Yeah. - And I would crank out that stuff. And after that, it was a long, hard slog. I think I hit the pavement for a good, solid two months. If I remember right, my phone bill showed I called about 400 people. - Wow. As part of your job search? - As part of my job search, and this is before really widespread email, before everyone had a website ready-to-go.

- So you're no longer part of a niche work flow? Now you're doing the whole thing? The whole shot top-to-bottom? - And it was six of us down in the trench. Like a literal trench. You would go downstairs, (laughing) and we were all just on a line. (laughing) We didn't have a render farm. If you wanted to render, you would take it to a machine in the corner. We had a small - did we have a rack? Yeah, we had a rack. We had a rack of machines, and you would log in. You would load your my scene. You would say render one to 100, step five.

Start rendering. Go to the next machine. This was really before the explosion of render farms like Cube, or Deadline, or whatever Pixar's free one is. - Well, there was a point at which the hardware cost dropped down so much, and it was, you know, really after the turn of the millennium when things really started to come down in price where it became practical to actually have a render farm, you know, and not be Pixar or Sony or any of the other big folks, and so I think that was really a groundbreaking time because now, you know, small shops like that could really start to compete.

Did you see a dramatic turn in the level of work that you guys were doing? - I think that happened when I was at Tippett, actually. So after a year at Stargate, I kept talking to people, and a good friend from college, actually, Joseph Hamdorf, who's still at Tippett now. - Wow. I think he's been there for maybe 20 years. - Wow. That's incredible. - There's some niches for career people, but on the whole, like 90% of it, you're just bouncing from studio to studio and country to country, so they got my reel and called me up for an interview, and they liked me, and I left Stargate to be a part of the crew working on the third Matrix movie.

- Fantastic. - So doing some smoke and whatnot, but it was a real change being part of a whole team as opposed to doing my own thing, so I had to learn how to be part of a pipeline pulling the models here and pulling the animation here, and just work on my own little thing. - Did that, from a personality standpoint, so you, now, again, part of a team, and how was it, you know, making that transition from, you know, actually having to share your assets now and you know, clean up after someone else's mess or have them clean up after your mess, and, you know, that had to affect the development process, too.

- Like working at Square, there were a lot of seasoned industry people, a lot of pros, and it's really hard to make it in this industry if you're not a team player, if you're not a good communicator, so personality-wise, it was great. Tippett's probably one of the best places I've ever worked at, actually. I think about it fondly all the time. - What kind of shows were you working on? - Let's see.

There was Matrix Revolutions. There was Hell Boy, Constantine, Shaggy Dog, and actually, they were slowly grooming me. They were slowly advancing me, giving me more responsibility. Like in Shaggy Dog, I was the only effects artist, and if you look at the credits, it says Clear Menser. - Wow. - I did get some help from other people on other shows, but I was the one delivering the images.

- Wow, that's incredible. That's a lot of work for one person to take on. - It was about 40 shots, I think. Lots of fur. Lots of water. So, after being the sole effects guy on Shaggy Dog, I went to a lead in having three people and up to eight people under me for Enchanted, the Disney movie with Amy Adams and they're in New York.

- How is that, you know, some of that is due to both budgetary pressures and the speed at which movies have to get done. The studios keep asking for shorter and shorter deadlines, and they have to spread the workload out across multiple shots. How do you, as a single v effects artist, you know, whether or not you're leading the team or whether or not you're part of the team, you know, how do you, or maybe even do you, feel vested in the product at the end when you end up being a tiny cog in this gigantic machine pushing this massive movie out? - That's a really good question.

Like, ownership of the shot by the artist, I feel, is just as good as having an artisan or craftsman who wants to make a beautiful product, so if the producers come in or the client comes in and starts changing a lot, kind of changing the ground underneath you, it's hard to get attached, but Tippett had some really good producers that would really fight for the artist and say, "I'm sorry, no, that's over budget.

"We can't make that change." - Wow. - But you don't always get producers like that. Sometimes, you'll get ones that just say yes to everything. -Right. - And that's a really dangerous thing to say yes to everything because then it sets up an unrealistic expectation, you know, you started off in school as a classically trained artist, you like computers, making that kind of imagery, and you're acquired, you know, modeling skills, and texturing, and lighting, and rendering, along the way, so what would be the, like, what's next, like what's a thing that you're looking to develop and how do you go about developing your new skills and still, you know, earn a living at the same time? - When you're at a really large studio, you can, like, help out another department.

Say you're effects TD, and you want to learn compositing, you can help roto a shot, or you can help crank out a bunch of repetitious stuff. You can basically be an assistant to another department, but if you're a generalist, it's a little hard to break out. You basically have to do it on your own, at home, in your spare time. - Wow. - So weekends, basically. There's a lot of, what's the best way to put it, a lot of sacrifice necessary to branch out because your employer wants you to do your job.

- Right. - Me, personally? I'd like to go deeper into Houdini, looking at chops and then looking at rigging, as well. That seems to be one of the more mysterious parts of Houdini. Like, there's actually a bunch of stuff about rigging, like with muscles, and capture regions, it's just an effects package right now. -Yeah. - But it can do character stuff.