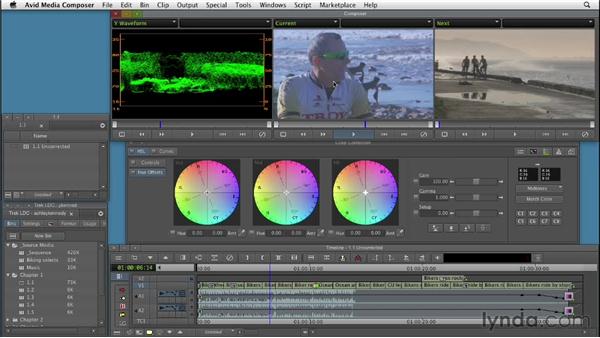 Color Correction is one of the final essential stages in the post-production process and should be performed after you've finished editing your program and have reached picture lock. There are three basic stages within the color correction workflow. First, you make changes to the contrast and color of the shots in your program, so that you can fix problematic footage that may be too dark, too bright, or that might have an improper color cast. And you can also make sure your skin tones have the proper hue and saturation. Next, you spend time ensuring that each shot appropriately matches the other shots within the same scene and has proper visual continuity.

This is often called shot-to-shot correction. Finally, it's where you make creative changes, giving your scene a specific look or treatment. Finally, if you're sending your show to broadcast, it's also where you bring your footage within legal broadcast standards once you've performed the previous three stages. We'll take a step-by-step look at each stage in the color correction process in just a bit. But first I want to discuss how you go about color correcting your shots. Let's head into Media Composer. All right, we're in the software, and we're in Color Correction mode.

We'll take a look at exactly how we get here in a future movie. But right now I just want to make a few references. When performing color correction you need to rely on both your eyes, as well as video scopes. You use your eyes to tell yourself what part of the image is what, as well as the general idea of how you go about correcting it. But you also must use various video scopes to measure the appropriate values as you're correcting. For example, let's take a look at this image here. Now by looking at this image we can tell that it's overall just too blue.

It's also pretty muddy, which means there's not enough contrast. So already we know that we probably need to remove some blue, as well as make the highlights lighter and the shadows darker. That will increase the contrast and make the image pop more. Now, the flesh tones also look really dark and dingy. So we'll need to warm those up quite a bit. So we'll be adding some red and yellow back into the midtones. So here we've used our eyes to give us some clues about what needs to be done and how we're going to do it.

Now while we go about all these steps, we also use video scopes to measure the values. So we're not just eyeballing it. Believe me, our eyes can deceive us. So we'll need some precise tools to help us out. For example, we'll need to actually map the blackest part in our image at or near video black, which has a value. If we look over here on the Y Waveform-- which again, we will go into in great detail in a future movie--we need to map the darkest part of our values to 16 on the 8-bit digital scale, or 0%, and we need to map the whitest part of our image at or near video white, which is equal to 235 on the 8-bit digital scale, or 100%.

If we exceed these values, we produce illegal values for broadcast, and the show will get rejected. Now even if we're not going to broadcast, it's still a good idea to adhere to these standards. Don't worry, we'll go over all of these specific values later. Just realize that measuring your adjustments is important, but so is using your eyes. You can't just rely on the scopes to make your adjustments because the software doesn't know what part of the image is supposed to be what. We know this is a face, but Media Composer doesn't. That's why you need both.

Now after we're done color correcting the shot, we need to make sure the shot matches all the other shots from the same scene. So as you can see here, we have a lot of different lighting schemes within the scene, and we need to make sure that everything matches and has visual continuity. Finally, we might want to add a creative look or feel to stylize the footage. There's a lot to consider, and we'll get to everything in this course. So as you can see, you have a lot of things to do during color correction, and it's important to use both your eyes and the video scopes to achieve your goals.

Now that we've gone over the very basics, let's take a look at how we can apply it in practice.