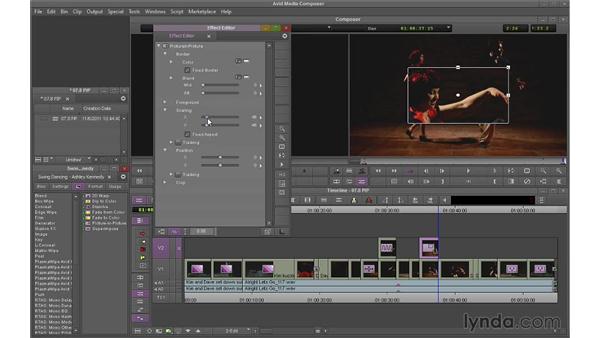 Female 1: One of the most common vertical effects is called a picture in picture effect or PIP. A PIP is an effect that produces multiple images on screen simultaneously by way of a split-screen, vignette, or other transposition either with fully opaque images or a combination of opaque and transparent images. You've probably seen this in action a lot in television and movies. Let's take a look at how a PIP works. Alright. So, I've got my sequence here, and on downstream from the transposition I have a couple of clips stacked on top of one another right here.

On v two I have a medium shot of Kim dipping Dave down. And on v one, I have the long shot. So we see the entire action. Alright. So, what I want to do is actually put both of these shots in boxes within my frame. And I want to add a red border around it because we kind of have some red highlights in this dance sequence, and I think that'd look really good. So, I'm going to come to my Effect Palette. And in the Blend category I'm going to apply a picture-in-picture effect to v2, and I would apply one to v1.

However, what we're going to do is actually kind of, steal some of the parameters for the adjustments that we make on v2 and apply it to v1. So we'll hold off on that for just a second. So as you see, I have two images here. We can see both of them. By default, Media Composer gives the picture in picture a 50% scaling and it centers it right in the middle of the image. Alright, that's not what we want, so let's go ahead into the Effect editor, and as you see here, we have several parameters. We have the border, the foreground, the scaling, the position, and crop but we're only going to be working with border, scaling, and positions.

So I'm going to simplify it for myself, and have just those open. I'm also going to come over into the Effect Preview monitor, and I want to apply a key frame at the beginning, and at the end. You don't always need to do this, but I like to do it because it's really useful to have both a beginning and end key frame most of the time. So, we want to affect both of these key frames simultaneously, so I'm going to click on the last key frame and press Ctrl+A or Command+A on a Mac, and then I'm going to come in to the Effect Editor, and let's go ahead and scale this down just a little bit.

My fixed aspect box is checked, so both x and y are going to be affected at the same time, and I can either just drag here. It's very sensitive, so if I wanted to do this with a little bit finer adjustment, I could hold down Shift, and it responds a little bit better. So let's have it be a little bit less than 50%, and we can also manipulate my position parameters so I can grab my x and grab my y, and maybe bring that up into the upper right hand corner.

Next, I can add a border and to be able to see my border I have to add a width. So I'm going to click on width and I think I want a width of about five. And when I do that, you see a border, but I want it to be red. So let's go ahead and just click on the button to the left of the color well, and select red, and OK. Alright. So this is my basic effect I think. So let's go ahead and save this out. And we'll be able to borrow some of these parameters and apply it to the clip right below it.

So, I can either click and drag on the effect and drag it to a bin. So I would actually need to come over to bins and create a new bin. And I can call it effect template. And we can drag it in there, and I can use it for later, but you also have the option of just dragging it straight onto the clip. So I can click and drag with my mouse and release on V1, and you actually want to make sure that V1 is selected, so I'm going to click on V1. And you'll see here that it's positioned directly behind the other clip.

And, now we can see both frames with the same effect applied to each, with the exception of the position. And let's play through. Okay. And you know what, we have several more camera angles of this exact same action. So if you're following along with the exercise files, feel free to add a couple more video tracks and play around with your own effect composite design.