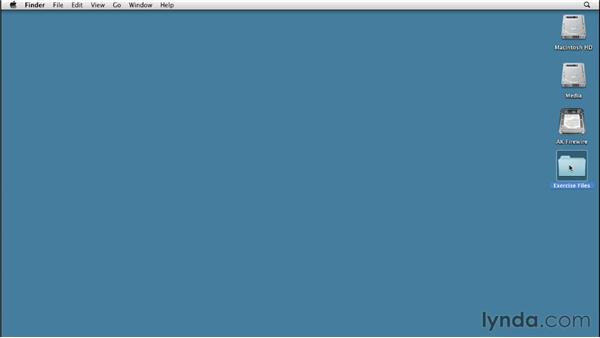 If you're a premium member of the lynda.com Online Training Library, or if you're watching this title on a DVD, you have access to the exercise files used throughout this title. So if you've just unzipped your exercise files, you should see an Exercise Files folder. And for this course, inside are two other folders: one is called Avid MediaFiles, and the other is called Trek LDC, for lynda.com. Now it's very important that you put your Avid MediaFiles folder at the root directory of your Media drive.

So I have a Media drive right here, and I just have another folder on there called BACKUP, but I want to put it right at the root directory, which means I don't put it inside any other folders. So I'm just going to drag it on over. And it's also crucial that you never rename this folder. This has to be named exactly Avid MediaFiles with a space and with a capital A, M, and F, and no space in between MediaFiles. So bottom line, don't move this and don't rename it, and Avid will always see the Media.

Now if you use Avid and you already have an Avid MediaFiles folder, like this drive, then you just need to burrow in a little bit and there will most likely be a number 1 here. Well, it has to be Avid MediaFiles and then MXF and then a number, but the number doesn't have to be 1. So, I've provided you in our exercise files with a folder called 101. So you could simply drag the 101 folder right next to your other numbered folder.

Okay, so those are the two scenarios. You either put the file on the root directory of the drive by itself, or if an Avid MediaFiles folder already exists, just put the 101 folder next to the other numbered folder. The other folder in the Exercise Files folder is your project folder, and you can leave it here, you can drag it to your Desktop, you can put in your Documents folder. It can live basically anywhere. So there's no need to move this to a special location. I'm going to go ahead and just leave it inside of my Exercise Files folder.

And let's go ahead and open up Avid Media Composer and take a look inside. We're at the Select Project dialog box. What you are going to do is navigate to your project folder, and I left mine in the Exercise Files folder on my Desktop. So I'm just simply going to click on this folder icon right here and go to my Desktop > Exercise Files, and it's called Trek LDC. Open. And your project will open, and inside are all of the folders for the course.

Now _Source Media basically contains some master Sequences and the footage that you're going to be using. You don't really have to use this too much, though. We're going to be focusing within these individual folders. So, for example, when we start up Chapter 1 Movie 2, just open up this bin by double-clicking, and then there will be an overlay appearing on the screen telling you what file to load. So when we need to load the sequence called 1-Trek Un-color corrected, I'm just simply going to double-click on the sequence.

It's going to load, and everything is online. And it's online because you put the Avid MediaFiles folder in the correct location. Now remember, I'm on a Mac right now, but Avid Media Composer works equally as well on both Mac and PC. So if you are on a Windows system, just do the same exact thing, drag your Avid MediaFiles folder to the root directory of the Media drive and then open up your software and then navigate to your project folder and you're ready to go. Now if you're not a premium subscriber to lynda.com, you don't have access to the exercise files, but you can follow along from scratch with your own assets.