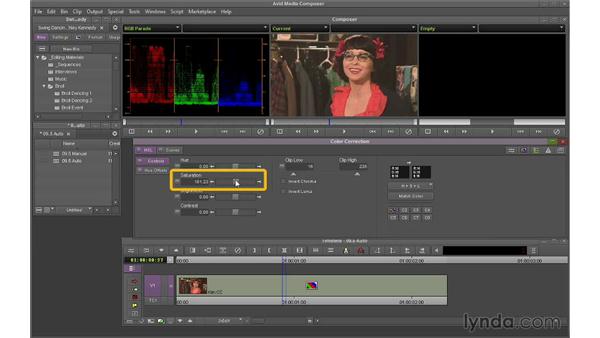 Female 1: There are also some automatic functions in Media Composer's color correction tool. These shortcuts can be very handy, but it's important that you use all of the knowledge of manually correcting, so that you don't use the auto color correction incorrectly. Okay, so we have our raw image, totally uncorrected, and this time we're going to use the automatic functions. So, as you remember, the first thing that we do is set our blacks and whites, using the y waveform monitor. So, I've got the y waveform monitor pulled up, and I want to come down to these buttons here, where we see auto black and auto white.

So first I'm going to set auto black. And you can see that all of my black values are brought down near 16. And now I'm going to set auto white, where the brightest parts of my image are brought up to 235. Now, you can imagine that for this to work, the darkest parts and the lightest parts of the image actually have to be black and white. And there's actually a function that does this all in one. I'm going to press Ctrl+Z, or Cmd+Z on a Mac, twice to undo both of those functions, because I want to look at this button here, which is auto contrast.

This is going to simultaneously set my blacks and whites in one move. So I'll click on this button, and you can see that the darkest parts of my image were brought down and the lightest parts were brought up. Now, we still have a color cast, so I'm going to move on to the RGB parade. Just like we did with manual corrections. And as you can see, the red channel of our black values is high, just as with our highlights. So, what Avid is going to do, is it's going to analyze the balance between the blacks in all three color channels, and the whites in all three color channels, and try to bring those into alignment.

And it does this via the auto balance tool, which is this first button right here. So I'll go ahead and click on auto balance, and when I do so, watch my cross-hairs in all three chromo-wheels. And it brought my blacks in alignment. And it brought my whites in alignment. And it's really hard to see the blue trace right here, but we have the whitest part right up here at 235 in all 3 channels. Alright, so this did a pretty good job of correcting my image with automatic corrections.

If I use my dual split button, you can see the before and after. Pretty good. And one thing it didn't do was touch my saturation, so I want to bump up her saturation just a little bit after I perform my automatic corrections. Remember you have that control in the controls tab, right here. And I'll just go ahead and warm her up just a little bit, look at my vectorscope when I do that. Alright, so this is the automatic correction that Avid was able to give me.

I think you'll agree that the manual correction does look better. We're able to remove more of the color cast and I just think it looks brighter, but we did do a pretty good job of getting most of the way on the automatic correction. So my advice would be that if you use the automatic correction, do it to perform a baseline adjustment, and then tweak the results further until you get the results that you could with a manual correction. Now I'd like to show you how to do this all within one button.

If I come to my Settings tab and I go into Correction and then I go into the Auto Correct tab, I can have Media Composer first correct my HSL Auto contrast. So we, we're working in the HSL tab, and we want to first set our whites and blacks, so auto contrast will do that for me. And then I want to come in and do HSL auto balance. So these are the two things that we did minus the saturation change, when we just performed our automatic color correction.

So I'm going to say OK. We've now programmed the color correction effect to do this. And then, if I come into my effect palette, you'll notice in the image category that I have something called a color correction effect. And that's what this is. So, let's go ahead and take off our correction here. I'll remove effect, and then I'm simply going to drag this effect onto this segment and release.