Using the Smart tool to move and trim shots 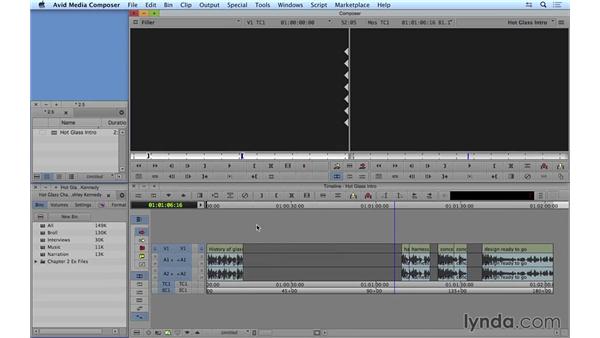 Okay, so I'm a few steps further than where we were at in the last movie, and I continued laying in my sound bytes. Now if you're following along with the exercise files, and you're just jumping into this movie without having completed the steps in the previous movie, you can join me in the hot glass chapter two project, but you'll just need to perform the AMA reeling step that I showed you at the beginning of the previous movie. Alright, so I have my sequence here and everything is a little rough right now. We definitely need to trim a couple of frames here and there, and I am not totally convinced that everything is in the right order.

And I definitely want to create some space so things can breath a little bit better. All right, so that's what we are going to tackle in this movie. So the first thing that I'd like to do is, reorder some of these shots. I want Susie to talk about the concentration that it takes to perform glass blowing before she actually talks about the design being ready to go. All right, so I'm going to come over to this tool right here, it's called the Smart Tool. If they're all on for you right now like so, just click on this outside bracket to turn them all off.

Now the reordering Smart Tool is this yellow arrow right here, and it's actually called Extract Splice in Segment mode. Nobody calls it that, most Avid editors just call it the yellow arrow. So I'm just going to select that and only that, and I'm going to come down to this shot here and you can either click and then shift click or you can lasso it like that, and I'm just going to drag this over to the left to make this come this shot here. Now when I do this, you can see that it's going to drop it wherever I release my mouse.

Okay, and I don't want to drop it right in the middle of the shot. I want to drop it right in between these two shots here. So what we need to do is snap to the edit. Now before when we needed to snap to an edit point, when we were splicing, we pressed Cmd, or Ctrl on a PC as we click near the edit point. So we're going to do the same thing here, as I'm dragging, I'm just going to hold down the Cmd key or Ctrl on a PC. And you'll notice that I snap to my edit points as I drag, okay? So, I'm just going to release right here, and you can see that I very cleanly swapped those shots.

I think that's all the rearranging I need to do, but the next thing that I'd like to do is create some gaps between some of my lines, so that this breathes a little bit better. All right so to do this, I'm going to turn off my yellow arrow, and I'm going to turn on my red arrow. Which again is officially called lift overwrite segment mode, but again, most editors just call it the red arrow. And this is going to allow me to move things around and create some space. So, if I'd like to move my last shot over by a few seconds, I just click and drag, like so, and release.

Now I have a gap here, if I'd like to create a gap in between Caroline and Suzy here, I can just grab all of these shots, and you can do that several ways. You have to start up here, in the gray area of the timeline when you lasso, and you have to fully encompass all of the shots. So you can see that I can just lasso around all of these shots like so. Just want to show you that if you don't fully encompass the lasso, anything not included doesn't get included in the move. Another way is to just park your play head right on the shot, and then choose this command right here, select right, and then everything from this point on gets selected.

And then you just move it on over, like so. So, I'll do the same thing here, and move. All right, so now we've got some spaces in between our sound bytes. One thing though, do realize that if you grab a shot and drag it over another shot, it's going to overwrite it. So definitely not what we want to do here, just be aware that this tool is destructive if you're actually dragging clips over clips. Finally, I just did want to mention that there are other ways to create space in your sequence if you don't want to use the red arrow.

Because if you have an entire sequence full of clips, a half an hour or an hour long, and you just need to create a little space, moving things over like this might not always be the best solution. You can just come up to your click-me menu here and choose load filler, and this loads two minutes of blank silence, or filler, and so, if you want to you can just mark and in and an out and splice this in, okay? So if I wanted to add some extra space right here for example, I can just press v to splice in, and I've added some space.

I want to add a lot of space, just increase that duration and V, and you've added a lot of spaces, so I'll undo that, Cmd+Z a couple of times and we're back to where we were. And I want to move back to my Smart Tool. So we've already talked about my yellow arrow; which rearranges shots. My red arrow which allows me to move shots around, and then I want to come down to our two trim tools here, we're going to start with ripple trim. So I'm going to enable this, and I'm going to come into this edit right here.

I don't want to click in the middle, I don't want to click on the left side. I want to click on the right side, and then I just drag over to the right. And release. Let's see if we've got it. I'll go ahead and just press space bar and it will play around the edit. >> We're harnessing that energy. Alright so, I think I got rid of the We might need to just soften that a little bit, with a little mini transition a little bit later, but I think I got rid of what I don't like. To disable ripple trim, I can either click on this again, or you can actually just click on the time code track, and it will get you out of trim mode, and then that's still selected and you can go to another spot, and do it again.

Which is what I want to do, we'll go to, the end of concentrations I think I need to get rid of a few more frames. I'm going to go ahead and play this. >> Concentration, and >> So I think it's very clear that we just need to get rid of this part right here. I"m going to click on the left edge and drag back, and let's play. >> Concentration. And maybe just a couple more frames, zooming in a little bit here. If I want to use some buttons instead of dragging, I can. These right here are my trim buttons, so I can trim left eight frames, one frame, or trim right one frame, or eight frames.

This corresponds by the way to the M, Comma, Period and Forward Slash keys. So I'm just going to tap the Comma key a couple times which corresponds to trim left one frame and let's see if we've got it. >> Concentration. >> Alright, good, I'm going to zoom out here and I want to take a look at one more thing. I think this is best demonstrated by going where I don't have any gaps, so in-between these two lines here, for example, let's go ahead and play this. >> Rotation while I'm working because I have to count, I have to know what's going on and it's so dynamic.

>> You have to count, and it's so dynamic. >> All right, so if we know we needed to create some space there, overwrite trim is what we would use. I'm going to undo, Cmd+Z, because I actually don't even want to take out that line. But I did want to show you the difference between trimming with ripple trim and overwrite trim. I'm just going to turn this off now, because the way I work is that I leave my smart tools off unless I actually need them, and then I'll turn them on. All right, so that's the dime tour of what the smart tool can do. There's still a lot more that it can do, which we'll explore later in the course, but this should give you a good introduction into the main functions of moving and manipulating and trimming.

Basically all things grabbing of the shots in your sequence.

Video: Using the Smart tool to move and trim shots