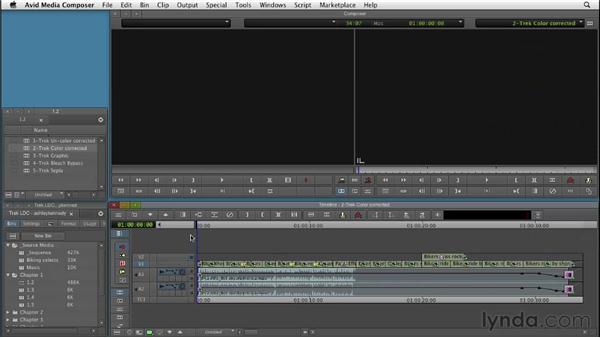 So we've explored why in theory we perform color correction on our footage. In this movie, I thought we'd take a look at some actual before and after treatments so that we can get an idea of where we are going. Our client doesn't quite know what they want, so we'll present them with several exciting options. Now, if you've watched the first movie, you're already familiar with some of the problems we have with this footage. I'm going to play through the short sequence, which doesn't have any color correction, so that you can see some of the issues.

(video playing) As you can see, we definitely have quite a few issues in terms of color balance and contrast and in regards to our shots matching one another.

Now I'm going to scrub through the same sequence, this time once it's been color corrected. Go ahead and load it up and just briefly scrub through. And we've got some nice contrast and nice saturation. Everything matches each other very well. This is a nicely color corrected sequence, and we haven't applied any other treatments to it yet, but we've just done the baseline grade. We've corrected for contrast, we've removed color cast, and it's ready to go if we do want to apply some treatments.

Okay, let's take a look at some additional treatments that we might want to present. This one here. Go ahead and scrub through it. This has a very graphic gritty quality, very high contrast, very high saturation, and it definitely is very stylized. So, this might be something that our client is interested in. And we'll go ahead and load this one up. And this here is a Bleach Bypass emulation. This actually emulates what you can do in film development when you either partially or completely skip the bleaching function during the processing of color film.

Now, when you do this, you keep this silver lining in the film emulsion, along with the color dyes, and this results in like a black and white image over a color image, and it usually results in reduced saturation and increased contrast and graininess as well as--as you can see-- a tendency towards being blue or green. So that can look very cool. And let's take a look at one more. Got a Sepia treatment. And as you can see here, this is emulating old, faded photograph or film.

We've also added some film grain to it to add to that antiquated quality. So, you've seen this a lot before, and we will definitely take a look at that later as well. So, as you can see, color correction can deeply affect the way we emotionally feel about a scene. And throughout this course we'll learn not only how to correct our image so that it looks good and falls within legal broadcast levels, but we will also learn how to apply different treatments, some of which we've explored in the sneak preview.