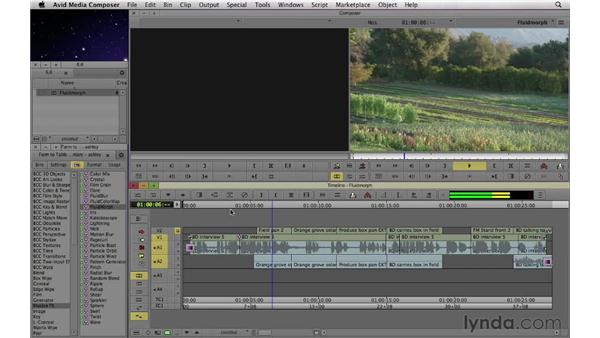 As we learned previously, stringing together multiple talking headshots and then covering the resulting jump cuts with B-roll is a standard way of working when editing documentaries. Most of the time, this works out just fine. You're able to cover up the jump cuts with the appropriate footage without any problem. Sometimes however, either because you don't have the right B-roll, or because you don't want to introduce a weird flow of too much B-roll in a certain area, you may just want to include two talking headshots edited one right after another. Fortunately, you can usually do this without the audience noticing by using the FluidMorph plug-in.

Let's take a look. All right, so this is the conclusion of the documentary, BD is talking about how much he loves his life and his profession. I've got a lot of B-roll here, and I just want him saying as a talking head right here I don't want any B-roll over this area. So I want him talking throughout this cut. So I'm going to go ahead and just play through the cut so you can see what I'm talking about. (BD Dautch: ...the luckiest person in the world, to be able to do what you feel is your calling.) All right, so what I want to do is just smooth that out, and so I'm going to apply the FluidMorph plug-in.

I'm just going to play through it, so you can see kind of what's happening through these 8 frames. Again, this is the A side. So, this clip right here, and by the time we're finished with the 8 frames, we'll be to the B side. All right. Not bad. Could you tell where it morphed? It's literally happening throughout this transition. So, it's pretty hard to tell, and it's doing a pretty good job. I'm going to go ahead and render it, and then we'll play it in real-time.

So I'm going to Render Effect, okay, and I'm going to go ahead and play through, and let's see how it works. (BD Dautch: ...in the world, to be able to do what you feel is your calling. I mean, I just--) All right, well, you might have noticed just a tiny bit of a morph as you kind of look at his hair and the side of his face. I promise you though, if you were just watching it, and you didn't know that it was there, it really would not be noticeable. Now this is not really possible if the background changes significantly or if the position of his face or body would change significantly.

But for an interview where the subject is usually situated in the same general area and the background is unchanging, this is a really nice solution. Now, I'm going to go back into the Effect Editor, and I want to talk about a couple of other parameters. If this doesn't work, you'll probably want to come down to this pulldown menu and change the combination. Now, everything on the left represents the A side, and everything on right represents the B side. So right now, we're still on the A, still on the B.

All this means is that this is the last frame of the A side clip, and the first frame of the B side clip, and that's what's being morphed. The stream is just the stream of video leading up to the cut on both the A side and the B side. And then basically it breaks it down from there, the stream of video on the A side with the still image on the B side and vice-versa. So, a lot of times if it doesn't work with Still->Still, I'll go to Stream->Stream and see how that works. So that's always a possibility. You also have the option of enabling Feature Match.

So basically, the way this works is it matches up the general Luma values of the face as it detects it on both the A and the B side. And so usually that's fine. But Feature Match goes a step further and takes a look at the features on the face and matches those up as well. So again, if you're not happy with the FluidMorph, you can come in and enable Feature Match, and then re-render it and see how it works. Okay? So, that's basically what I would recommend, change the way that the morph is happening throughout this dropdown menu, and then also enable Feature Match, and you're usually going to end up with something that looks pretty good.

All in all, I am pretty happy with this one. Again, I don't think you can tell very much if you don't know that it's there. So, I'm going to leave it as it is. So as you can see, the FluidMorph plug-in allowed us to include multiple interview shots without the need for B-roll to cover up the jump cuts. Now, while it won't work all the time, it's a great little tool to fix most small issues of this nature.

9/26/2012
This course shows how to build a polished documentary using Avid Media Composer and a few essential editing techniques. Author Ashley Kennedy demonstrates documentary editing in a real-world project, breaking down the process into a series of manageable steps and milestones. Discover how to define a project approach based on a client's creative brief, and then effectively review and organize the footage. Then find out how to use script-based editing methods and a wide variety of scene creation techniques to assemble a rough cut. The course also shows how to use effects to repair and enhance your footage, process client feedback, and add the film's finishing elements.