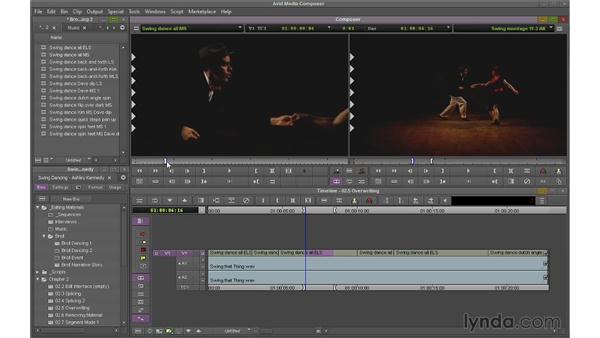 As we saw in the last movie, Splice is a great tool to quickly add shots to the timeline. Overwrite is another very useful tool that you can use to not only add, but also replace material in the sequence. You need to do both in conjunction with one another to properly build any sequence. So we have our base sequence here. It's the entire dance sequence edited together minus the poster at the beginning. We just want to focus on the dance. We got some comments that this third shot here is a little long.

Let's go ahead and check the duration. Again I'm just going to park right here and press T to mark clip. And we look up here and it's five seconds and eight frames, which isn't that long, but for a sequence like this with faster music, we want it to go a little bit quicker. So, what I want to do is actually insert a cut away right in the middle of it, of our medium shot. I'm going to clear my in and out point by pressing G. And let's pick a good section to get this cut away.

How about when their arms are extended right here. We'll go ahead and mark our in, and this time we're doing it in the timeline rather than the source. Let's go ahead and mark our out, right where Kim is about to turn around to Dave. So about right here. It's always nice to cut on action so you've got a nice fluid edit as we go from one shot to another. So this is almost a two second marked portion.

It's one second and 26 frames to be exact. And now all we need to do is find the exact moment that this occurs within our medium shot. I'm just going to go to my end point by pressing Q so we can get a good visual representation of where this is, and it looks like it's about right here. So I'm going to mark my in right here. Then I don't have to go any further, because this is an overwrite edit in which we need three points.

It takes three points to make any edit. Just like we were doing an in and an out in the source, with an in, or using the position indicator in the timeline, this time we're just doing it in reverse. We've got an in and out in the timeline, and we've marked our in in the source. So, three marks makes an edit. It's basically going to take this one second and 26 frames and count forward for me. So I'm going to press the Overwrite key, which is right here underneath the record monitor, or the B key on the keyboard.

I'll go ahead and press B. We've now edited in our medium shot into sequence. And let's go ahead and play through, and see if we like it. That was pretty good. It looked really smooth. We matched on action, so it was a really seamless edit. Let's go ahead and do something similar down here where we have another longer clip. Go ahead and choose the portion where we would like to make the edit.

Maybe this turn would be nice to cut on, so I'll go ahead and mark an in here. Let's go ahead and mark our out right here where they both have their right legs kicked out. And then again, we'll come back up here in the medium shot and see if we can find that moment so that we can overwrite. Alright, so it looks to be right here. Again, we want to cut on the turn. I'm going to go to this end point so I can see the exact visual moment that this occurs.

We want to match that up. There it is right there. I'm going to mark an in here, because as you can see, I still have my in point left over from before. So I'll mark an in, and again, one, two, three marks makes an edit. So I'm going to overwrite by pressing B, and let's see how this worked out. And now this entire dance sequence really does seem like it's one fluid performance.

It moves a little bit quicker just like our producer wanted. So it looks like Overwrite definitely was the tool to use here.