Check it out: Overview of changes from version 6 to 7 (NEW) 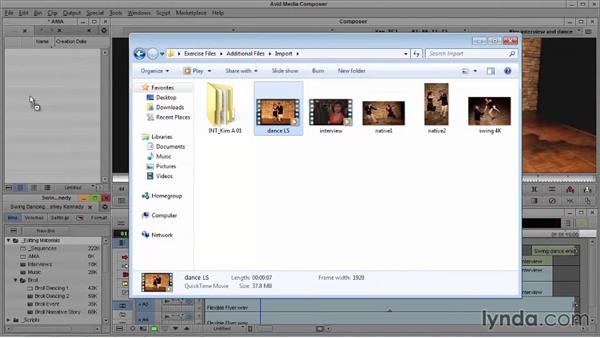 So you've got Media Composer 7 and are anxious to get started using it. Before launching into the main part of the training, I just wanted to share with you some of the major changes that you'll see in this version of the software. Now, FYI, this movie isn't accompanied by exercise files, so just sit back and watch as I demonstrate. Just to be completely transparent, I want to reiterate that the version 7 lynda.com training, is actually a hybrid of mostly the version 6 lynda.com training with additional movies and changed movies to reflect the changes that have come to version 7.

Now, the reason that we've done this is because, in this introductory level course, your experience Editing in version 6 would be extremely similar to your experience Editing in version seven, with just a few differences. Now if you're completely new to Media Composer, I recommend just watching the video through the first topic on Bins to learn about some of the global interface changes that may not be reflected in all of the movies within this course. So first up on the list is something that will be reflected in most movies within the course and that's a very small change that affects only the User Interface and not functionality.

And that is with the Bin. So, here I have a screenshot of the way it used to look. There was a button here and there was a Drop-Down so that you could go between Text, Frame and Script view. Now in version 7, these are broken out into these three menus right here. So instead of a Drop-down, we just have Text view, Frame view and Script view. So again, this is just a change in the look, not in the way that the Bins behave so, now if you're completely new to Media Composer you can probably skip to the next movie, the rest of the features in the movie cover the main changes from previous versions of the Software to this one.

Next up is audio. Basic audio tools got the biggest makeover in version seven, so let's go over those right now. And to do that, i'm going to open up a sequence and choose this one here. If you want to make a basic clip based audio change you no longer have to open the audio mixer to do that. Rather, you can just open the Track Control Panel which you do right here and then you can choose Clip Gain. When you do that, you'll notice that we have a Little icon in the lower left and a slider comes up and you're able to increase and decrease your audio right within the Timeline.

So this is a very handy addition for just very basic adjustments. Next up for audio, let's go ahead and open up the audio mixer. New to this tool is a Master slider which will affect the audio levels of all of your tracks at once. So essentially, you can raise or lower the entire mix in Tandem which can be pretty useful. Next up, I want to talk about AMA. Now there are a couple of changes here that I quickly want to cover. Let me go over to an empty bin here, instead of needing to go through the menu, going to the File and then AMA link, you can actually drag and drop your clips right into the bin.

I've got a folder of clips right here and you can either drag and drop this click, if I don't hold any modifier down, this will perform an import and it will import this based on your media creation settings. Or, if I hold down Alt or Option on a Mac, it will AMA link. As you can see, the file was brought in and I've linked to this file via AMA. We bring that up again.

You can also link an entire folder, so here I have a folder with lots of clips in it. I'm just going to Alt+Drag, or Option+Drag on a Mac, bring it in and then all of the clips are brought in automatically without having to go through any menus. Again, we'll go over this in much greater detail later in the course. But this is just a quick intro to the ways that these features have changed. One more thing regarding AMA, you used to link to either AMA file or AMA volume. Now, it is just AMA link and you navigate to 1 file or you can Ctrl click or Cmd click on multiple files and bring everything in like so.

And of course you can still just bring in a folder of files by clicking on the Parent Folder. And then just one last thing regarding AMA, I'm going to go ahead and throw several of these clips into the timeline, so that we have some AMA media. And as you can see these clips are purple. And the reason for that, is that in the Timeline Fast Menu in Clip color, you can choose to have your AMA Media visually separate than the rest of your media.

So working with AMA and traditional media is now simple as ever and you even get a visual indication of which is which. I'm going to undo that, Ctrl Z. And I just want to go over one more thing here and that is Frame Flex. Now, Frame Flex allows you to natively work with very high resolution files, like 2k, 4k and above. Now, just to quickly show you this, I'm going to take one of the clips that I brought in via AMA and we'll go ahead and grab this one for example.

I'm just going to go ahead and sort of go through this and let's say that I want to a tighter shot and on Kim here. I'm just going to right click and choose Source Setting and in the Frame Flex tab, I'm able to resize this frame, like so and you can see the results down here. And this is going to allow me to access very specific parts of the frame without applying any Effects. Now, just imagine this with a 4K file, for example you can be working in an HD project, bring in a very large video file, re-frame it and maintain the true HD resolution of the file while you do it.

I'll go ahead and say okay and you'll notice that the clip was reframed. Now if I Edited this into the timeline, which I'll do right here, in, out and splice, I'm able to easily go back by simply parking on the clip, going into the Effect Editor, and then you can see that even though I don't have an effect applied, because I used Frame Flex I get my sizing box and I can resize as I like. We'll take a much closer look at FrameFlex later in the course.

Now there are, of course, other new features in Media Composer 7. But we've covered the features that are important to the Media Composer 7 Essentials training. Which, again, is going to introduce you to the most important introductory and intermediate skills in this exciting software. With that said, let's move on to the official training.

Video: Check it out: Overview of changes from version 6 to 7 (NEW)