Adding B-roll to enhance the interviews 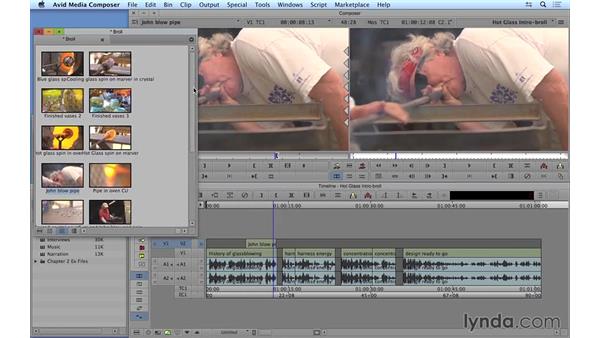 In this movie, we'll add B roll to visually enhance our narration and interviews. All right, so I am almost where we left off in the last movie, just a couple more tweaks. And if you're following along with the exercise files and just jumping in now, join me in Hot Glass Chapter Two. And you'll just need to perform the AMA reeling steps at the beginning of the fourth movie in this chapter, basic editing. What I'm going to do is, open up my B roll bin. And let's go ahead and expand this, and take a look at it in frame view.

And I'll just press Cmd+L, or Ctrl+L on a PC, a couple of times, and fill window so that I can see everything nicely. All right, and let's go ahead and play the first part of this and get some ideas about what we actually want to see as we are hearing Caroline and Suzie. >> Glass blowing has been around since the height of the Roman Empire. It was around that time when people discovered that molten glass could be inflated by blowing into a hollow tube, and shaped by the human touch. >> We're harnessing that energy, making it respond to our will with our bare hands, wet newspaper, on the 2,000 degree surface.

All right, so, I think I'm going to let Caroline talk onscreen, without any B roll for the very first part. But when she starts talking about people learning that they can inflate glass with a hollow tube, let's show that. What I'm going to do is just find a shot that I like, and there are a couple. Let's see, we have Suzi blowing into a hollow tube here, which might be fine. And let's see, we've got John blowing here, which, I think is a little bit more interesting, kind of have a rack focus.

We have the glass in focus in the foreground and then. We rack focus to John blowing into the hollow tube in the background. So, let's do that. So, I'm going to start the shot about right here and press i to mark an in. And I'm just going to play forward with L and mark an out where I want the shot to end. And so, now I want this to go over this part here. So I'm going to add a video track. I'm just going to press command y or control y on a pc. And then what we're going to do is just patch v1 to v2. So, we want the video from the source to be patched to the video on the timeline.

I'm just going to deselect my red arrow here 'because I don't need it. And the way you do that is you just drag an arrow from V1 to V2. And I'm going to disable my audio 'because I don't need it, and I want to find the exact place in the timeline where I want this to go. >> And when people discovered that molten glass could be inflated by blowing into a. >> Alright, about right here, I think. So, I can mark an in point here or I could simply just park my play head here, and it will act as my in point. All right, so I've got my in and my out, and my in. And I'm going to go ahead and overwrite this in.

Overwrite is this red arrow right here or the B key on the keyboard. So, I'll just press B, and there we go. And I'm going to play this. >> Molten glass could be inflated by blowing into a hollow tube and shaped by the human touch. >> We're harnessing that energy. >> All right, I think that works well. I'm just going to move it over just a little bit. So, I'm going to grab my red arrow, and bump this over just a little bit. And you know, I might actually just also grab my overwrite trim and start this a little bit later, like so.

And now I want to go to a different shot where we have glass being shaped by the human touch. On a sort of two in a row before we get to Susie here. So, let's go back to our b-roll bin, because I think I have a shot of both Susie and John doing this right here. Okay, and what we'll do is probably just steal this section right here. But instead of marking an in and an out in the source monitor like we did the last time, I'm going to do it in the timeline.

So, I'm going to just come here and find when that glass leaves the frame, about right there, and I'm going to mark an in and an out about right there and then we'll cut to Susie. If I'm every curious about the duration between my in and my out and my timeline, I just need to make sure that my timeline is selected and then look right up here in the center duration box. And I see that it's two seconds and seven frames. So, let's take a look at exactly where this is going to be cut in. All right, you want to take a look at what's happening here. The glass has just left the frame. And probably about right there, okay.

So, we've marked an in here and out here, we're using the playhead as the inpoint there, and I'll press b to overwrite, and let's play. >> Shaped by the human touch. >> We're harnessing that en- >> All right, so visually, I do think that works. This is obviously not the same piece of glass in this shot, and in this one. But I think by association, it will work for the viewer. All right, so we are to the point where Susie starts talking. And we're going to let her be on screen for a little bit. But we do have this jump cut here that we have to cover up.

I'll go ahead and play that. >> Making it respond to our,. >> All right, so I'm going to just command click or control click on a PC right here, and it will snap right to that edit point. So, we can start our next piece of b roll right here. So what she's doing right now is talking about harnessing the energy, touching it with bare hands and wet newspaper. So, we want to find a good shot for this one. So again, I'm going to mark an In here, and I'll play forward with L, and I'll mark an Out where I think the shot should end. >> Making it respond to our will with our bare hands, wet newspaper.

>> All right, so let's go ahead and get a shot where we see bare hands and wet newspaper, and I think there's a couple of those, as well. Oh, let's see, there's one here, okay. So, probably this part of the shot right there, in fact, let's just use that. I like that. All right, so, let's go ahead and get that part of the shot there. And this time, instead of marking it in or using my playhead as the end point, what I'd like to do is end the shot right about here, okay. So, I'll mark an out point.

So, in this case, it's going to take this duration here in the timeline, which you can see in four seconds in 18 frames. And then it's going to take this out point and then back time it, okay? So, I've made my three edits in, out, and in this case an out point in my source. And just looking at the track selectors down here, even though I have audio selected here, because it's not selected in the timeline it's not effected so it won't come in. And I'll press B to overwrite. And there it is, let's go ahead and play. >> Energy, making it respond to our will with our bare hands, wet newspaper on the 2000 degree surface.

So, I've got my in point, I've got my in and my out. I'm going to press b to overwrite, and let's see if this works. >> Hands, wet newspaper on the 2000 degree surface. >> All right, I think with a little music, that will be really powerful. So I'm just going to keep going, and I'm going to listen to what's being said. And I am going to continue to find the right shots to help tell my story