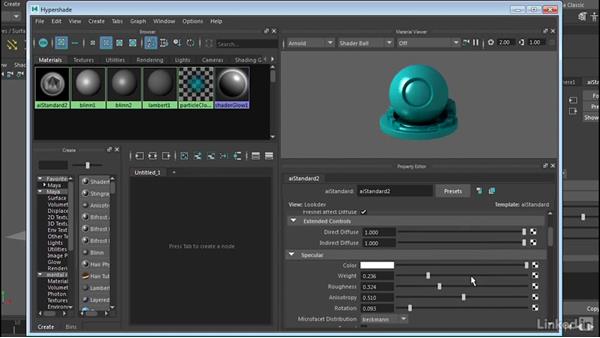 - [Voiceover] Now let's took at how to create materials for Arnold. Now before we get started, we wanna make sure that we are using the Arnold Renderer. Now, Arnold can use Maya's standard materials. So, if you wanted to select an object such as this ground plane, and place a blend material onto it, you could easily do that. And it would work in Arnold. But in order to get the most out of Arnold, you probably should be using what's called the Arnold standard material.

So let's take a look at how to do that. So I'm gonna select an object in the scene, and under lighting shading, I'm gonna select assign new material. This will bring up this window here. And if go down, we can see under Arnold, we have a number of different shaders that we can select. So I'm gonna take a look at the AI standard material. So if I select that, it will apply that material to my object. Now, if i select my object in the attribute editor, I can go over to the AI standard material and play with the attributes.

But probably the easier way to see this is use what's called the Hypershade window. So let's go into Hypershade. Now when we're in the Hypershade window, we can select any renderer we want. In this case, I'm gonna select the Arnold Renderer. And as you can see this is coming up a little bit darker, so I'm gonna go to this exposure setting here and just bring that up to about two, and that will give me better exposure on this image here. So now we can go through and change some of the attributes of this material.

We also have a roughness control. So when it's at zero, the object looks completely smooth and it will reflect light as if it was a smooth surface. But as we turn it up, it starts to scatter the light, so the surface doesn't appear as smooth, okay? This is great for things such as cloth and things that don't readily reflect light. And then we also have a backlight control. And as you can see, when we turn that up, it kind of starts to self-illuminate the object.

So at zero, it's not blurred at all, and so it's just a square object. But as we turn this up, it starts to blur the edges of the highlight and softens it. So, in another renderer, this might be called a soften or blur control. Now we also have anistropy, and that makes the highlight asymmetrical, which is great for things such as metal. So if I turn this up and affect the rotation of this, we can change the direction of the highlight.

Now going a little bit further down here, we also have our reflection controls. So, how much is this object reflecting? So, is it reflecting a lot? Is it complete mirror, in this case? Or is it somewhere in between? Now, we'll just do internal reflections, which means will it reflect itself. And then we also have what's called fresnel, which will just change the quality of the reflection.

Now finally, we also have a refraction control, and that's for if the object is opaque. So we have an opacity control here. So we can turn down opacity to make that object semi-transparent. Now when you do opacity in our Arnold, you also need to setup the geometry to be transparent. So I'll take a look at that in just a little bit. But just know that transparency in Arnold is not as simple as it is in other renderers, but I'll I'm gonna go ahead and turn that up.

Now, if your object was transparent, you can actually affect the index of refraction. So now that we understand some of the basic controls here, let's take a a look at what this looks like. So I'm going to do a render of this simple scene. So now we have our final image here. And as you can see, the AI standard material is very reflective. We set that up. I also set up a blend material on this, and so as you can see, there's a little bit of a difference.

Now, in addition to the AI standard material, there is one more material I want to show you. So I'm gonna go ahead and select this object here, and let's go into, again, lighting shading, assign new material, and then under Arnold, I wanna do the AI skins shader. So we take a look at that. Let's go into our Hypershade again, So I have my AI skin shader selected, and I'm gonna go ahead and, again, bring up my exposure to two.

Now what this does is it creates a skin that's easy to work with. So if you're doing things like creatures, this is a great way to create their skin. So one of the reasons that skin works so well is that it's doing what's called subsurface scattering. So, the light actually goes into the surface and then comes out. It doesn't reflect directly off the surface. It reflects from somewhere below the surface, and that's what gives it this kind of nice soft glow.

So we have some controls here for SSS. SSS is subsurface scattering. So right now, that is at one. We turn it down, you notice it gets a little bit more plasticky. And then we also have what's called shallow, mid, and deep scatter. So shallow scatter is basically the topical surface of the skin. Mid scatter is just below the surface. Deep scatter is way below the surface. So if we wanted to, say, change this color here to maybe something a little more orange or something like that, you can see how that deep scatter tends to affect that skin pretty dramatically.

And then in addition to this, we also have a specular layer. So you can make it shinier. And we also have a sheen layer, so if there's kind of a slight coating over the skin, you can do that. So as you can see, there's lot to work with with the skin shader, and I just really wanted to introduce you to it so that you know it is there. Arnold does have its own materials, which you should get familiar with using. But you can also use Maya standard materials as well.