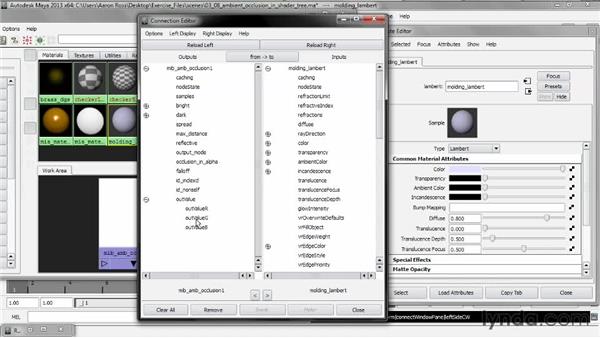 Ambient Occlusion is a very helpful tool that can be used in any shader network or shader tree for a mental ray rendering. It's not just for the mia material. There is a stand-alone Ambient Occlusion node that you can use to for example, give the effect of light being blocked to dim the color of a surface. Let's do that. I am going to create a new standard Lambert shading node for this piece of molding here.

Go ahead and select that and right-click. I can use any kind of material. In this case I am just going to use a Lambert and give it a diffuse color of maybe a lavender color. I will go ahead and do a render of that so we could see what that's going to look like without the Ambient Occlusion shape. So we got Ambient Occlusion here on the wall, but we do not have any here on this piece of molding. Go ahead and store that. I'll open up the Hypershade and grab my Lambert, that I have created here as lambert4, why don't we give that a name, call that molding_lambert.

I really am not able to connect that to the diffuse amount of a material. If I select that material node you'll see Diffuse and it's not a color swatch. When I middle-mouse drag this over here what's going to happen is the connection editor is going to pop open. So I'll middle-mouse dragging that and releasing it and I see the connection editor. Again the reason I'm saying this is because the output of the ambient occlusion node is a vector which has three values. The thing that I drag it onto this diffuse amount is only a single floating-point number.

Maya doesn't know which of the three red, green and blue channels should be connected to the diffuse input here. In the connection editor I'll just choose the green channel. Open up outValue here on the left and select outValueG and I want to connect that to the diffuse amount here, which is just listed as the diffuse, go ahead and click that. I know that's connected because you can see this is highlighting in yellow indicating there's an incoming connection. We also see the icon here to take us to the input node.

So that connection has been made, go ahead and close my Hypershade and go back to the Render View, which I have got minimized here. Let's do an interactive production render on that. Go ahead and click IPR, and drag a rectangle around that. It is working, it's just that we need to adjust the values on the Ambient Occlusion node; go over there and select that. What have we got? We have got the Bright, the Dark; those are basically already set the way we want them. There will be a maximum occlusion in the crevices here because Dark is set to Black.

So that's all there is to that. The spread is actually something different. Spread is in fact, how it's going to look around at other surfaces in what direction it's allowed to look. You can increase that up to one if you want, it just increases the contrast slightly. I'll need to increase the number of samples to get a better look here, maybe 32 or 64 samples. So I have got an Ambient Occlusion effect happening on that surface. Again, it's just a standard Lambert shader, nothing fancy.

3/1/2013
Dive deep into the Hypershade window and shader creation with Maya and the mental ray rendering engine. In this course, author Aaron F. Ross shows how to create materials and shaders for 3D objects, characters, and landscapes, with reflectivity, transparency, and amazing texture. Become more comfortable building shader networks and open up a lot of new possibilities for creative surfaces in Maya.
Topics include: