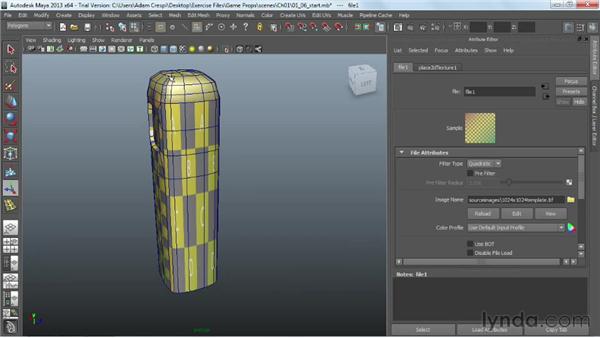 I'm deep in unwrapping the gas pump, and I'm going to put on the temporary material so I can tell what I am doing a little bit better. I have unwrapped the front, and I need to unwrap the sides and top and get them laid out. What I will start out with though, is selecting the object, right-clicking, and choosing Assign New Material. I'll put a blinn material on, sliding the nameless slider up at the top of the Assign New Material dialog and clicking on blinn. I'll scroll over, and there's the attributes on my blinn. What I have also done and here is to delete the history, as it did say poly tweak and extrude and so forth. And I really didn't need to go back to it; I just need the polygons.

We can delete History by pressing Shift+Alt+D. I'll call this blinn unwrap_checkers. This way know it's a temporary material I'm using if I spot it later, and I can make sure I get a proper material on before I go over to my game engine. Now I'll click on the texture for Color, and in the color, in the Create Render Node dialog, I'll pick File. It puts in a File node, and I'll click on the yellow file folder to go browse for an image. I've put in the sourceimages folder for this project a file I use called 1024 x 1024 template.

It's a file I made in Adobe Illustrator, and what it's got is gray and colored squares and letters. What these let me do is see, where is a map tilling and repeating, as red and green will meet up or yellow and orange or whatever it is? The letters also let me see local distortion in each square and if it's facing the right way. A lot of folks tend to use black and white checkers, and I tend to shy away from that, and the reason is that black stretching to black is black; white stretching the white is white. The only place you can tell you have a stretch in your unwrap using a simple checker pattern is at the border of the black and white.

So I would rather use something that lets me see, where is it tiling and where is it stretching within that image? I'll click Open, and then I will press 6 and show that texture in the view. What we can see here is that I've got the front unwrapped and although it's backwards, it's at least proportionate. The squares are square. But the sides and top are badly stretched, which is part of the modeling process. We're seeing the original UVs of the original box still in place on some of it, but because I've added to the model and pushed it around and extruded, they are stretched and mashed up here.

Now I'll start unwrapping the sides. What I will also do is turn on Wireframe un- shaded so I can see would I'm doing. I'll press F11 for face, and I'm going to unwrap the side and then the top. I'll look back at the reference and see if I can find a clean border. Here in the reference, I can see that the side is a separate panel that snugs up under the top. The top flares out slightly, and I'll zoom in so we can see it. It's got a bit of a lip here where the steel has been curled under and then popped out, both for strength and to provide a watertight joint.

This is a great place to break the texture, as I can see the rust on the top comes down to this lip cleanly and then it's red and rusty in a different way on the side. If I plan correctly in my unwrapping then, I can unwrap the side and then the top and get a clean unwrap where I can paint in rust and not have to worry as much about making the rust match from side to top. On the side then, I'll press F11 for face, I'll pick the object, and pick those side faces. One of the things I do when unwrapping sometimes is press 5 to go back to a shaded view without the texture, so I can see what I'm doing a low clearer.

I'm going to pick these side faces, picking two, holding Shift to add the second, spinning around, and picking those two. Then I'll grow the selection by pressing Shift+>. Now I'll press 6 and make sure I'm catching enough polygons. It looks like I need to grow out that selection a little bit more. I'll press Shift+> once, twice more. I'll press 5 to switch back to shaded view, and it looks like it grabbed the amount of the side I need but went too far in the top.

Here in my front view, or in a perspective, I'll hold Control and deselect those top polygons. Those are the sides I want selected for my unwrap. I'll go back to that Shaded with texture view and show the planar unwrap on it. I'm using a planar unwrap because these are nearly planar; that subtle curve won't make a difference in the unwrap, and I want to project on it cleanly. I'll choose Create UVs > Planar Mapping. A lot of folks like to go into the dialog and try to get the sides right-- X axis, Y axis, and so forth. Really, it's faster sometimes for me to just say Planar Mapping, and then I'll look in here in the planar mapping attributes in the Rotation and at some version of X, Y, or Z on 90 degrees, or some multiple of, to get it flipped in the right direction.

Then what I will do is take that Height, copy it, and paste it in the Width. We can see here on the side that now the squares are square. Yes, these are backwards. They're mirrored. On this side they are correct, and I'll deal with that in the next video. But the side is unwrapped, the front is unwrapped, and the other side is unwrapped. I'll repeat the process with the top, and then I'll get into laying out these textures.