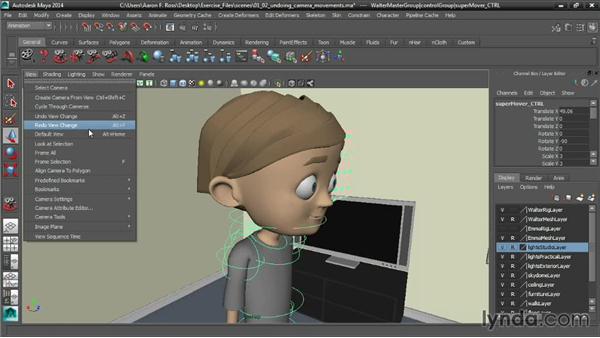 In Maya as in some other 3D programs, there are actually two sets of undos. There's one undo buffer for scene commands, like moving an object or selecting something. And there's another set of undos for camera movements. So we need to understand the difference here. And until you get a handle on this, you might experience some unexpected results, so let me demonstrate. Let's say I grab the Move tool, and I click here on Walter's supermover. And let's say I move him back.

And then I decide I want to get in closer, so I'll use the Viewport shortcuts Alt+middle to track, and Alt+right mouse to dolly forward. And let's say I make a mistake. Let's say I accidentally position him over, too far to the side. And I decide that I want to undo that particular viewport move. Well the normal undo won't work. What will happen if you do a normal undo is that Walter will move back to where he was originally.

And you can do the undo either by going to Edit > Undo, or by clicking on the Undo button on the shelf, or by just pressing the Z key on the keyboard. Those will all do the same thing. I'll click the shelf button. So you see Walter move back to where he was originally. But I did not undo the viewport movements. The track and dolly commands I did. If I want to undo those track and dolly commands, I can do that from the View menu here.

And that's less important for perspective use, but it becomes more important when you're using actual renderable cameras. Because you might accidentally move the camera and need to get it back to where it was, and it's just better if you have the Undo command available to you. So to make this happen what you do is go into the Current Cameras panel, to the View menu. And under Camera Settings, you'll see Undoable Movement. You can activate that. This is an attribute of the camera, so you can also access this from the camera's attribute editor.

I'll just go ahead and click Undoable Movement, and now if I move the camera left, then if I want to undo that, then I'll just click on Undo here. Boom. And it's done. So those are your options. The default behavior is there's a separate command for Undo View Change, or you can activate Undoable Movement for each camera. And that way you can just use the ordinary Undo command or the Z key.

2/17/2014
While Maya's cameras offer you a tremendous amount of creative freedom (even more than real-world cameras), their controls can be complex. This course helps you learn how to expertly adjust them. Aaron F. Ross covers viewport display, controlling orthographic cameras, framing shots, editing with the Camera Sequencer, simple and compound camera moves, and many different special effects. Start now and learn how to expertly position and animate cameras in your Maya projects and give your audience a window into your 3D world.
Topics include: