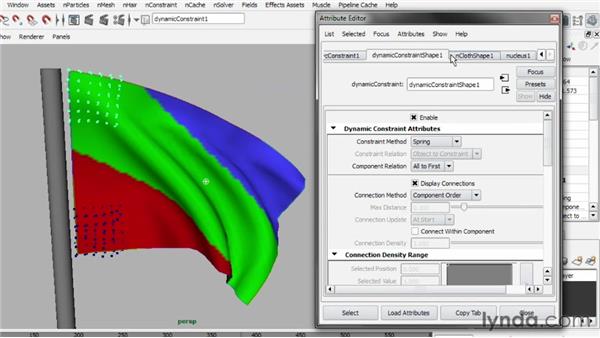 Before we begin building an nCloth scene, I want to spend a few minutes describing the nature of Nucleus. Nucleus is the underlying framework upon which nCloth is built, and other modules within Maya have been built upon Nucleus as well. Currently, with version 2013, we've got nParticles, and also nHair. Today, we're going to be focusing, of course, on nCloth, but let's talk for a moment about the basic components of a Nucleus simulation.

So I've got a constraint here, which is attach the flag to the pole, or to near the pole anyway, and I am going to click here just to select that constraint, and open up the Attribute Editor -- Control+A -- because here we can see all these tabs, and that will help to explain the process for a Nucleus simulation. I've got this constraint node selected, but there are also other nodes here. There is an nClothShape node, and that has all of the physical properties of our cloth: how stretchy is it, how heavy is it, how thick is it, and so on.

And then we've also got over here another node, which is the nucleus node, and that, if I scroll up to the top you will see, has got some really basic parameters here under Gravity and Wind, and that's a dead giveaway that this is the global settings for the entire Nucleus system. I could have 10 flags all attached to the same nucleus solver node, and they would all have the same Wind Speed in the same Direction, same Gravity, and so on. The nucleus solver also have some important properties down in here in Solver Attributes that let you control the quality of your simulation on a global scale.

We'll be looking at all these in detail later. I wanted to just give an overview of the basic concepts of Nucleus, and how that relates to nCloth.

11/30/2012
Take an in-depth look at nCloth, the Maya toolkit for simulating high-resolution mesh cloth for 3D characters and animations. Author Aaron F. Ross explains the roles played by the various "actors" in an nCloth simulation, including the nucleus solver, nCloth objects, passive colliders, and nConstraints. The course begins with basic simulations such as flags and ropes, then progresses to building a simple garment, until finally integrating animation and special effects like falling leaves and tearing cloth. Aaron also covers performance optimization techniques such as nCloth and nucleus solver settings, proxy objects, collision layers, the Wrap deformer, and more.
Topics include: