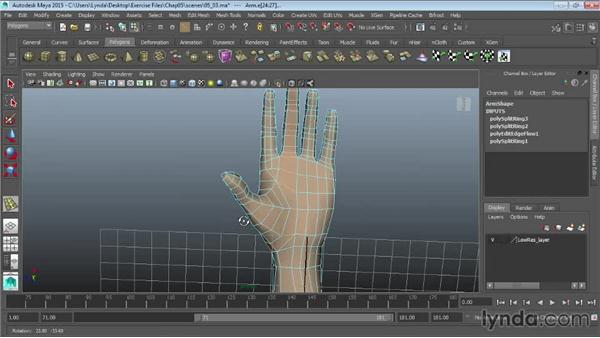 As you model in polygons, you want to try and keep your geometry fairly regular, and this typically means creating what are called quads, in other words, four-sided polygons rather than three-sided or multiple-sided polygons. So let's take a look at this hand. Now typically, most of the detail in this hand is what we call a quad. So if I select a face, you can see I have four sided faces here, here, and here. Now in the model, we also have a few areas where we have triangles.

Now typically when you go to smooth your geometry or deform the geometry, sometimes triangles can be problematic. So you want to generally try and avoid them, but sometimes the topology of a model just prevents this, and if that's the case, you can reorganize your model. So, let's take a look at this particular model and see what a problem that triangles can create. So as we did before, we can do insert edge loops. So, let's go ahead and just go into Edge Mode here, and do Mesh Tools > Insert Edge Loop.

And let's go ahead and do what we did before, which is add in an edge loop along the fingers here. Now, we could do it along the ring finger or the pinkie, but I saved this middle finger for last, because we're going to have a problem with it. When I try and insert that edge loop, notice how it doesn't go all the way down the forearm. It kind of stops in the middle. It stops right here rather than continuing all the way down. And the reason for that is actually underneath the hand, in the palm. So if we flip the hand over and rotate, you can see that as I try and add in this detail, we have a triangle right here that's preventing this edge loop from going all the way down the arm.

So in order for me to add the detail I want, I need to reorganize this triangle, basically. And I can do that in several different ways. I can actually rebuild this by leaving out the polygons and redrawing it. Or probably the easiest way is just to select the edge and then under Edit Mesh we have two options here, Spin Edge Backward and Forward. And notice how the hotkeys are Ctrl+Alt plus left and right. I'm going to hold down Ctrl+Alt, and start spinning this.

So I'm going to go ahead with my left arrow here. And you can see that this is the orientation that I want. I want to make sure that I have a quad all the way down the arm. Now I can certainly spin this around however I want. But this is really the orientation that I'm looking for. Now once I have this, then this completely changes the way that I insert my edge loops. So if I go back into mesh tools, insert edge loop, you can see that now it goes completely down the arm.

That's because I eliminated that triangle that was blocking the way. So when you model, try and keep your geometry to quads, in other words, four sided polygons. It will be much easier to add and modify edge loops. If you do have to use triangles, place the geometry strategically. So that it doesn't interfere with your main edge loops.

6/26/2014
Need to get a strong foundation in Maya? Start here. This Essential Training course covers all the latest features in Maya 2015, while giving you a background in the basics of 3D modeling, texturing, animating, and rendering. Need a quick overview? Check out the first chapter of the course, which covers the interface and basic object manipulation tools. Author George Maestri then takes you deeper into polygonal modeling, editing and refining meshes, and NURBS modeling—for sculpting curves and organic surfaces in Maya. After that, learn how to create and apply materials to give the surface of your models color, texture, reflectivity, and more. Next, create realistic images (with lighting and depth-of-field effects) in the final rendering process, and finally, add movement and life to your characters with Maya's animation tools.
Topics include: