Prepping a model for nHair 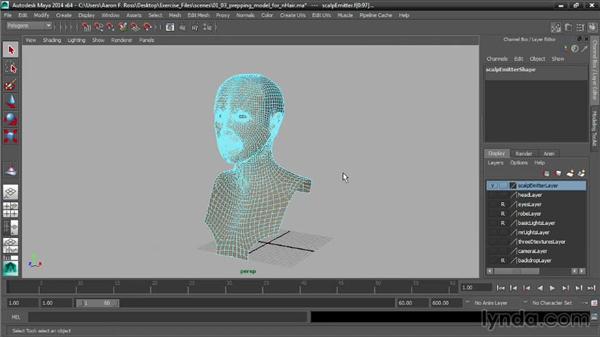 The first step in creating an Anhair simulation, is to prepare the model. And here of course we've got a character, and we want to apply hair onto that character's scalp. Now we could paint hair follicles, or we could select individual faces. From which the hair would then grow. However, it turns out that it's just actually better to make a duplicate object that only represents the scalp. And that will act as an emitter, that will cause the hair to grow outward. And we do this for a number of reasons, primarily because if we have a separate scalp emitter object then we can easily and automatically distribute follicles across that surface including passive follicles which calculate more quickly.

I'll begin by hiding the other objects here. I've got them on display layers arleady. I'll hide the eyes. And the robe, and I'll select the character's head mesh and make a duplicate. Edit>Duplicate. You can also use the Ctrl+D shortcut. And now I've got head mesh one, I'll go ahead and rename that and I'll call it scalp emitter. And I want to place that onto its own layer. With it still selected I'll go to the display layers and click the button that says create a new layer and assign selected objects.

Now I've got layer one, and I'll double click on that, and I'll rename this layer to scalp emitter layer. Now hide the original head. Now, what I want to do is select all the faces that are not going to be part of the scalp. I'll probably want to do that in the side view, tap the spacebar. Go to the side view. And using any selection technique you want, you can go ahead and just select everything that's not going to be part of the scalp, and then just delete it. You can use the lasso tool for that. I'll right-click and go into Face selection mode and I'm just going to select everything that I want to be deleted including the ear.

And you might need to take a few stabs at that to get it right. Of course, you can use the Ctrl key to remove faces from a selection. I've tapped the Space Bar and gone out to the perspective view and I want to check the selection that I made before I do anything drastic. And I selected everything that is not going to be part of the scalp. And with all those faces selected, I'll simple press the Delete key on the keyboard. And now I've got a scalp object. I want to make sure there's nothing else left behind. If we want to, we can go around and clean up some of these little topology glitches here and there. I'll leave that for you to do on your own.

The one thing that we do want to make sure that we do is to move all these faces either inward or outward so that they are not exactly coincident with the main mesh surface. I want to go ahead and unhide that head layer so we can see it. And you can see right now that the faces on the scalp are exactly coincident. And we want to move those slightly outward or slightly inward so that they're not exactly on the same surface and that way we won't need to worry so much about what the faces are visible or anything like that. So what I'll do is I'll just select them all.

And then I can use Transform Component tool to move them slightly into the head. Use the Edit Mesh menu to do that, Edit Mesh>Transform Component and then move it inward just ever so slightly. So that it's inside that other surface And we can toggle the head layer a couple times to make sure or we can go into wireframe mode with the four key and just check to make sure that we haven't moved that in to far. Alright, very good. Hit the five key. Go back to the shaded view and also right click and go into object mode to make sure that we got the mode set correctly.

And finally we'll hide that head layer once again. And like I said earlier, we could clean up some of these little topology glitches here if those bother us. But I'm going to leave that for an exercise for you to do on your own. Last thing's we'll want to do is to delete the construction history, select the object, Edit>Delete by Type History. And just for convenience I want to move the pivot to the center of the object, and to do that we'll go to Modify<Center Pivot. And then select the Move tool, so we can see in fact that the pivot point is in the center of that Scalp object.

1/29/2014
Get tried and true techniques for creating, styling, animating, and rendering hair with nHair in Autodesk Maya. Aaron F. Ross will show you how to prepare your mesh; control for stiffness, shape, and curl; trim and extend follicles; style hair with curves; and adjust color, translucency, and specular highlights. The last chapter shows you how to render nHair with Maya and mental ray.
Topics include:

Video: Prepping a model for nHair